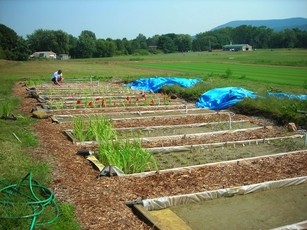 Newswise — Perfectly maintained areas of turfgrass that make the game of golf possible require the constant use of pesticides, herbicides and fungicides, which are often washed into adjacent waterways by rainfall. Researchers at the University of Massachusetts Amherst have identified plants that can be used to create "living filters" known as vegetative filter strips at the edge of golf courses to remove harmful pesticides from the environment.

"Studies from golf greens have shown that 5 percent to 10 percent of the total pesticides applied are lost in runoff. In worst case conditions, this figure can be as high as 30 percent," says John Clark, a professor of veterinary and animal science and a principal investigator on the grant. "We have identified plant species that can reduce the amount of certain pesticides in soil by up to 94 percent in the greenhouse."

According to the Golf Course Superintendants Association of America, there were more than 16,000 golf courses in the United States in 1996. Add to that the amount of ground covered by residential lawns, parks, athletic fields and sod farms and the total area in the U.S. planted with turfgrass is larger than New England. Golf courses are also being constructed at a rapid pace in developing regions, including Asia and Mexico.

Along with the increased use and maintenance of turfgrass has come an increased level of concern about potential human and wildlife health effects. "Turfgrass chemicals are routinely found in rivers, lakes and reservoirs as well as groundwater supplies," says Lanza, a principal investigator on the grant. "Once in the water, these chemicals affect the health of a wide variety of aquatic organisms, everything from bacteria and algae to fish and frogs. They may also pose a health risk to humans, but this is less certain."

Clark and Lanza identified 10 plants for a greenhouse study based on aesthetic value, a documented history of removing pesticides from soils and their value as a wildlife habitat. "Plants used in vegetative filter strips (VFS) have to add to the beauty of their surroundings, since they will be viewed by the public, and they also have to be practical for the sites where they will be planted," says Lanza. "We couldn't use trees, which are some of the best candidates for removing contaminants, since they can interfere with golfers."

Blue flag iris was the clear winner, able to reduce levels of the commonly used insecticide chlorpyriphos by 76 percent and levels of the widely used fungicide chlorothalonil by 94 percent in soil after three months of growth. Other plants that performed well in the greenhouse trials included eastern gama grass, a common resident of wetlands in the eastern United States, and big blue stem, one of the chief plants of the tallgrass prairie.

Successful candidates identified in the greenhouse study had the largest root systems, which provided surface area for the plants to absorb pesticides, or hold them in place in the soil while they were broken down by microorganisms. Large roots also open the soil to allow runoff to sink into the ground instead of travelling to waterways, creating a "pesticide sink."

This summer, plants from the greenhouse study, as well as others, are being tested in the real world at the UMass Turfgrass Research facility in South Deerfield, Mass. Twelve vegetated filter strips containing different combinations of plants were installed in the fall of 2007, and are now ready for evaluation during their first growing season. Field testing will document how well the plants work together in different communities, which combinations of plants make the best vegetative filter strips, and provide information on how individual pesticides are handled by the plants.

"Initially, the VFS will be evaluated to determine their ability to remove pesticides that are commonly applied to residential lawns and other turfgrass areas," says Clark. "But once they are constructed, the VFS can be used to test any suite of common pollutants, which should be of interest to homeowners, building contractors and regulatory agencies."