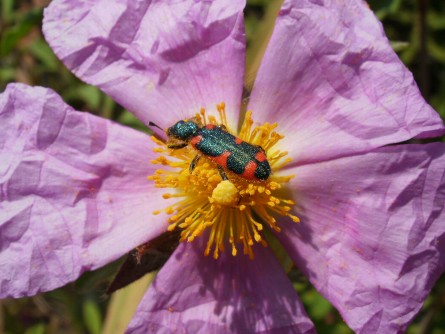 Media note: Photographs of plant species studied can be downloaded at https://cornell.box.com/v/FloralColorandScent.

Newswise — ITHACA, N.Y. – Who knew that it’s possible to predict the fragrance of a flower by looking at its color?

This is true for many of the 41 insect-pollinated plant species growing in a Phrygana scrubland habitat on the Greek island of Lesbos. An international research team published their findings Sept. 4 in Nature Ecology & Evolution.

The team investigated the way these plants communicate with a diverse assemblage of insect pollinators in the same community. They discovered a link between the color of the flowers and their fragrance, such that the two characteristics can be regarded as one integrated signal.

This is the first study to demonstrate color-fragrance integration for an entire plant community.

“This result shocked us because we collected and analyzed the data in a blind and unbiased way, and because previous studies had not even considered the possibility of scent-color coordination,” said Robert Raguso, professor of neurobiology and behavior, who participated in the study.

The flowers use coordinated signals of color and fragrance to attract insects, which acquire pollen during floral visits and ensure pollination of the plants. In turn, the insects benefit by acquiring nectar and pollen as food.

By connecting visual and olfactory channels, the flowers render their signal stronger and more stable under the intense environmental conditions of the Aegean. On windy days, fragrances may dissipate but colors will remain viable floral attractants, whereas fragrance could be the primary attractant when flowers are concealed by the dense vegetation of the Phrygana scrublands.

According to Raguso, it is also likely that many insects learn to associate nectar or pollen meals with specific combinations of color and fragrance.

“Bees are the dominant pollinators in our study site, and they have trichromatic color vision – they see UV, blue, green,” Raguso said. “But butterflies and beetles have divergent visual systems, and can also see in red. We designed our study to account for these different forms of perception and selective pressure.”

The study provides a new direction for research on the interactions between plant signals and animal senses.

“Progress in our field has been hampered by the ways that we study plant-pollinator interactions – focusing only on one spatial scale or one sensory channel,” Raguso said. “With this study, we took a step closer to what I suspect is the reality for most pollinators, which seamlessly integrate across sensory channels as they approach a food item, just as we do.”

The researchers estimate the study will lower the barriers to reaching a more holistic understanding of pollination, by providing a blueprint for how to perform unbiased sensory-ecological analyses in any plant-pollinator community.