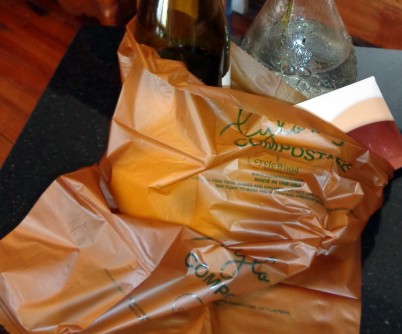 The bags are made with natural components and can be composted just like any other plant-based material.

Newswise — Wolfgang Glasser says he was hesitant at first when a start-up company asked him to be their chief scientific officer. But then the professor emeritus of sustainable biomaterials realized that cycleWood Solutions Inc. could make his dream — biodegradable plastics from a plentiful natural resource — a reality.

During his three decades with Virginia Tech’s College of Natural Resources and Environment, Glasser worked with many students as they advanced the field of natural polymers. But the most recent breakthroughs came in partnership with two University of Arkansas MBA graduates.

When Nhiem Cao, a chemical engineer, and Kevin Oden, an industrial engineer, both of whom had been with International Paper, had to write a business plan to complete their MBA degrees, they came up with a plan to use lignin, a natural polymer that helps form the cell walls of plants, for biodegradable plastic bags.

The plan won a number of regional, national, and international competitions, and then drew the attention, and support, of venture capitalists.

Cao and Oden called Glasser based on his work with lignin, and he agreed to consult.

“Then they went to National Science Foundation for a Small Business Innovation Research grant,” Glasser said. “The NSF wanted them to have a lignin chemist on staff, and that is how I became the chief scientific officer of cycleWood Solutions.”

The Fayetteville, Ark., company has created and tested a number of products. Pilot scale production volumes are being used for specific customer applications while the company moves towards commercial volumes.

Lignin is a compound of plant cell walls that is discarded in the papermaking process. Glasser began working with it because it was plentiful and cheap. It could be used to make “green” polymers — those from a renewable source rather than from petroleum. He worked with IBM to make green circuit boards, for instance.

“My ‘ah ha’ moment came when, in addition to viewing it from a resource viewpoint, I realized its environmental benefits,” he recalled. “It could be compostable. Plastic bags and bottles needn’t last forever.”

His research hit a speed bump when an important source of lignin dried up because the mill that provided it went out of business.

“The pilot pulp mill in New Brunswick, Canada, operated a 60-ton-per-day papermaking plant using ethanol for dissolving and isolating lignin, called organosolv lignin, that was used by many academics as well industries, like IBM, as a resource for developing ‘green’ products based on biobased resources,” said Glassser.

“Domtar, the first user of the technology, is isolating 75 tons of lignin per day and looking for markets,” said Glasser. The project, funded by the National Institute of Food and Agriculture, includes setting up similar mills across the U.S. to refine pulp and paper mill byproducts for biofuels and other bioproducts, “so lignin has become a cheap resource again.”

That’s where cycleWood Solutions comes in. Cao, Oden, and Glasser have filed patent applications on the chemistry and technology that deals with lignin modification and preparation of derivatives. The company has produced single-use plastic bags, trash can liners, and meat bags, and is testing cups and plates.

“The compostability was tested by a commercial lab in Belgium, and the bags meet the requirements of disintegrating to particles less than 2 millimeters in size in 180 days,” said Glasser. “The bags are made with natural components and can be composted just like any other plant-based material.”

Plastic garbage bags are being outlawed in many places worldwide because they don’t degrade; cycleWood bags degrade in composting operations. The process is speeded by the structure of the polymer, the composting process, and the addition of another biodegradable polymer with the lignin. “Lignin gives the plastic the needed strength,” said Glasser.

While a professor at Virginia Tech, Glasser worked on various issues involving lignin structure, delignification chemistry, and structure-property relationships of lignin-based materials, including thermosets and thermoplastics. He was founder and director of the Biobased Materials Center, which became one of Virginia Tech’s first Technology Development Centers, between 1986 and 1991.

More resources are available on the Virginia Tech News website.