Children with ASD demonstrate play preferences in a children's museum

Newswise — Play is critical to children’s development, including children with autism spectrum disorders (ASD). Kathy Ralabate Doody, assistant professor of exceptional education at SUNY Buffalo State, observed different play options to determine those most likely to appeal to children with ASD.The findings were published in the North American Journal of Medicine and Science.

One novel aspect of the research, conducted by Doody with Jana Mertz, program coordinator at the Autism Spectrum Disorder Center at the Women & Children’s Hospital of Buffalo, was that the children with ASD could freely select their preferred activities. The research was conducted at a monthly event, “Au-some Evening,” at Explore & More, a children’s museum with exhibits that are designed to engage children through play. The event is open to children with ASD, their families, and their guests.

In addition to the well-known senses of sight, smell, touch, taste, and hearing, Doody described others, including the vestibular and proprioceptive senses. The vestibular sense helps us keep our balance and know where we are in space; proprioception has to do with the way our joints respond to movement and pressure. “It’s the sense that makes deep-tissue massage pleasurable,” she said. Children with ADS preferred activities that involved the vestibular and proprioceptive senses as well as other senses. “Children with ADS sometimes tend to crave motion, and if they can’t be moving, they like to look at moving objects,” said Doody, noting that motion engages the vestibular, proprioceptive, and visual senses. “So just watching the windmill engaged them. When the windmill turned in response to their push, it also provided cause-and-effect play. And the repetition of the spinning movement provided a third level of satisfaction.” Climbing the stairs also satisfied multiple senses. Playing with rice provided both tactile and visual stimulation as children felt and watched the rice pour through their fingers.

By knowing the kind of play that children with ASD prefer, educators and clinicians can use such play as positive reinforcement in educational and treatment settings. “This information is especially helpful for children with ASD who have difficulty communicating their preferences,” said Doody.

Parents can also benefit from the information. “A child who is playing alone is developing a degree of independence,” said Doody, “and that can enable the parent or caregiver to engage in other activities, like making dinner or attending to another child. Parents might use a snow globe so the child can observe movement. Aquariums or water sculptures provide movement, too.”

Some of the behaviors exhibited by people with autism—hand-flapping, for example—may reflect a need for sensory stimulation. “Sometimes just giving a child a string of Mardi Gras beads to swing and watch will help the child sit still,” said Doody. Toys that provide sensory stimulation—sounds, movement, or lights—in response to an act such as pushing a button also may be well-received. However, Doody noted, the need for, and tolerance of, sensory stimulation varies by individual.

At Explore & More, children with ADS tended to avoid the exhibits that required pretending, such as imagining oneself as a butterfly or as a cook in a play kitchen. Doody explained that pretending requires a phenomenon called Theory of Mind, which is the ability to imagine oneself in the place of another. “That develops much earlier in children with typical development than in children with autism, if they develop it at all,” said Doody. Doody hopes that options for children with ASD will be built into a variety of recreational facilities, after-school programs, and playgrounds. The benefit is not only inclusion. “It also encourages social interaction between children with ASD and their peers,” said Doody. “Some children with ASD are academically successful, but they struggle in social situations. So opportunities to play with their peers are really valuable.” 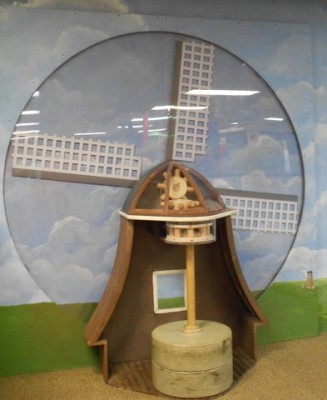 Caption: Pushing the arms of the windmill and watching them spin was among the play options enjoyed by children with autism spectrum disorder. 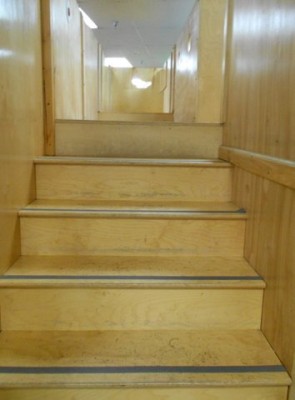 Caption: Climbing a set of stairs, followed by dropping a ball onto a track, was the most popular activity among children with ASD. 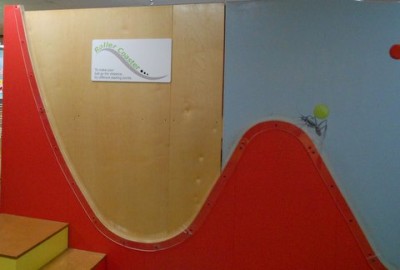 Caption: A track, fastened to the climbing stairs, enabled children to watch a ball travel. 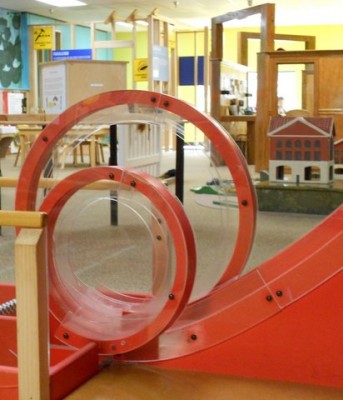 Caption: Loop the loop, in which a dropped ball traveled through the loops, was another favorite among children with ASD. 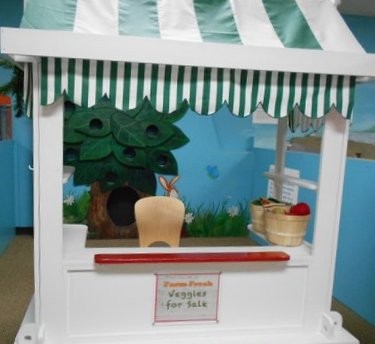 Caption: On the other hand, exhibits that required pretending, such as playing at storekeeper, did not engage children with ASD. 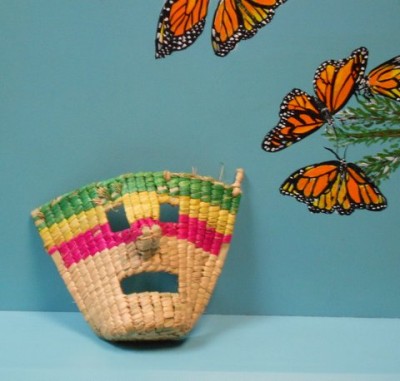 Caption: Pretending to be a butterfly was not popular, either.