Autonomous vehicles of the future may have plesiosaurs to thank for their efficiency and maneuverability. 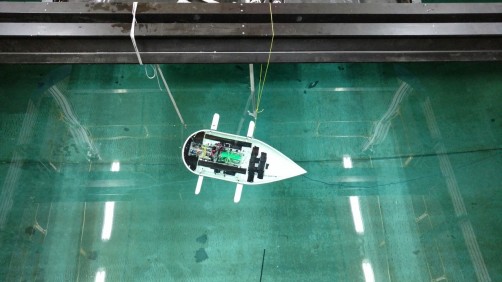 Atlantis in the water

Newswise — WASHINGTON, D.C., November 20, 2017 -- Plesiosaurs -- extinct, air-breathing marine reptiles with spectacularly long necks and sleek bodies -- thrived during the early to middle Jurassic Period (135 million to 120 million years ago). They used four paddlelike flippers of nearly equal size and musculature to swim the seas. Today, in contrast, animals including penguins, sea turtles and sea lions rely on much larger and stronger front flippers for propulsion, using their smaller back flippers primarily for steering.

Despite the seemingly subpar engineering, the fossil record reveals that plesiosaurs were incredibly widespread and prolific. This inspired a team of University of Southampton researchers in the U.K. to explore how swimming with four flippers might be advantageous compared to two. They’ll present their work during the 70th annual meeting of the American Physical Society’s Division of Fluid Dynamics, being held Nov. 19-21, 2017, in Denver, Colorado.

In previous work, the team used tandem flippers in a water tunnel to show that back flippers can achieve a significant performance boost by operating in the wake of the upstream flipper, similar to birds flying in formation. They discovered that the back flipper increases thrust by 60 percent and efficiency by 40 percent.

The team’s current work, dubbed “Project Atlantis,” was developed to apply this tandem-flipper enhancement to a swimming robotic vehicle. “We hoped it would enable highly efficient and maneuverable exploration of the ocean floor,” said Gabriel Weymouth, an associate professor for the Southampton Marine and Maritime Institute at the University of Southampton. “The students built a fully autonomous robot from scratch and designed it to be powered using only two motors, one for each side. To achieve this, each flipper pivots freely on its axle and requires no motors, sensors, or control systems. This greatly simplifies the mechanism and reduces the cost of the vehicle.”

The students’ work demonstrates that a very simple mechanism can be developed to take advantage of the tandem flipper enhancement used by the plesiosaurs. “At the conference we will focus on presenting the unique hydrodynamic elements of the design. The pivot of each flipper was optimized using open source fluid dynamics software to maximize efficiency and thrust,” Weymouth said. “Our vehicle was tested and found to be quite fast and highly maneuverable.”

According to Weymouth, they have a series of ongoing projects for further optimizing the design, control and flipper shapes of the vehicle. “Our long-term goal is to continue to develop this concept into a field-ready autonomous vehicle,” he said.