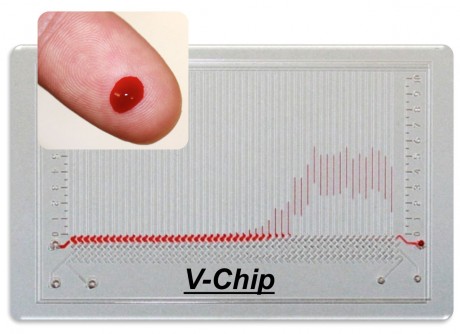 The V-Chip can measure 50 different substances, is easy to read, and in past studies has been extremely accurate about the presence of chemicals of interest.

Newswise — HOUSTON -- ( July 16, 2013 ) -- The National Institute on Drug Abuse has agreed to award $2.1 million to Lidong Qin, Ph.D., and Ping Wang, Ph.D., of the Houston Methodist Research Institute to develop a pocket-sized drug test for use in health care settings.

The three-year project aims to modify an existing device that is about as big as a business card and could produce test results in minutes, speeding the treatment of patients in emergency rooms, for example. In previous studies, the device was shown to be sensitive down to the nanogram-per-milliliter level, which is sufficient for drug testing purposes.

"Currently available drug test tools are either inaccurate or expensive," said Qin, the project's principal investigator. "If we're successful, our device will assist clinicians as they treat patients with substance use disorders. The accurate, multi-substance assay is designed to measure patient samples at the point of care, and be convenient for both patients and clinicians."

A Nature video about Qin's device can be viewed at: http://www.nature.com/ncomms/journal/v3/n12/full/ncomms2292.html

The device is called the V-chip, short for "volumetric bar-chart chip." It is composed of two thin, 3" x 2" slides of glass. In between the slides are wells for four things: (1) hydrogen peroxide, (2) up to 50 different antibodies to specific drugs or drug metabolites, (3) blood serum or urine, and (4) a dye -- any dye will do. Initially, the wells are kept separate from each other. A shift in the glass plates brings the wells into contact, creating a contiguous, zig-zagged space from one end of the V-chip to the other, mixing the four ingredients.

As drugs bind to antibodies bound to the glass slide, the enzyme catalase switches on and splits nearby hydrogen peroxide into water and oxygen gas. This approach is called ELISA, or enzyme-linked immunosorbent assay. The expanding oxygen pushes the dye up the column. The more of the drug there is, the more oxygen is created, and the farther the dye travels up the slide. Tests have shown the height of the dye is roughly proportional to the amount of substrate present, in this case, a drug of interest. The end result is a visual bar chart that Qin says is easy to read and accurate.

Wang is a clinical chemist and toxicologist who will provide clinical validation of the V-chip. The R01 grant is Qin's first. The V-Chip was invented by Qin's group at Houston Methodist Research Institute and was described in Nature Communications last year with an assay of cancer biomarkers in human blood.http://www.methodisthealth.com/body.cfm?id=495&action=detail&ref=985 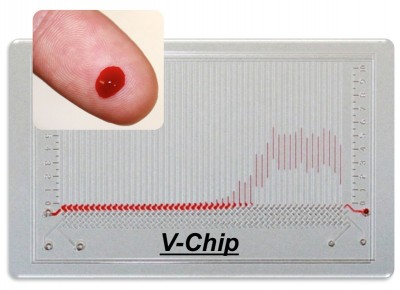 Caption: The V-Chip can measure 50 different substances, is easy to read, and in past studies has been extremely accurate about the presence of chemicals of interest.