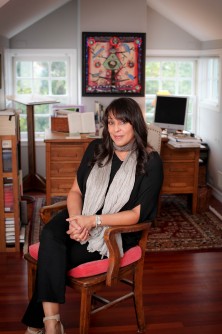 Newswise — EVANSTON - Renowned poet Natasha Trethewey, who joined Northwestern University’s Weinberg College of Arts and Sciences as a Board of Trustees Professor of English on Sept. 1, has been selected by the Heinz Family Foundation to receive the 22nd Heinz Award in the Arts and Humanities category.

The Mississippi native was awarded the Pulitzer Prize for Poetry in 2007 for “Native Guard: Poems” and served two terms as U.S. Poet Laureate. Prior to joining the faculty of Northwestern, she taught at Emory University.

Trethewey’s poetry draws on extensive research and on memories of her own experience as the daughter of an African-American mother and white father whose marriage union was illegal in Mississippi at that time. Her themes explore memory, history and racial injustice, and her writing style moves effortlessly from free verse to more traditional forms.

Her first collection of poetry, “Domestic Work,” won the inaugural Cave Canem Poetry Prize for exceptional work by an African-American poet. The poems were inspired by her grandmother, who began work as a housekeeper in 1937 and later worked as an elevator operator, beautician, factory worker and seamstress.

Trethewey’s second collection, recognized as a notable book by the American Library Association, is “Bellocq’s Ophelia: Poems.” The novella in verse tells the fictional story of a mixed-race prostitute based on historic photographs taken by E.J. Bellocq in New Orleans in the early 20th century.

Trethewey’s third volume, the Pulitzer Prize-winning “Native Guard: Poems,” juxtaposes her personal family history with the forgotten history of the Louisiana Native Guards, a black Civil War regiment. The poems pay homage to those who served and to the memories of her own life and childhood.

A two-time U.S. Poet Laureate (2012 and 2014), Trethewey was one of the youngest and also one of the most active laureates. She held office hours at the Library of Congress to meet with the public in her first year. During her second term, she worked on the six-part television special “Where Poetry Lives” with “PBS NewsHour” correspondent Jeffrey Brown.

Trethewey’s most recent works include a memoir, “Beyond Katrina: A Meditation on the Mississippi Gulf Coast”; “Thrall,” a collection of poetry; and “Congregation,” a chapbook of poems.

“Ms. Trethewey’s writing captivates us with its power and its ability to personalize and fearlessly illuminate stories of our past as a people and a nation,” said Teresa Heinz, Chairman of the Heinz Family Foundation. “We honor her not only for her body of work, but for her contributions as a teacher and mentor dedicated to inspiring the next generation of writers.”

Trethewey will receive the Heinz Award on Oct. 18 in Pittsburgh.