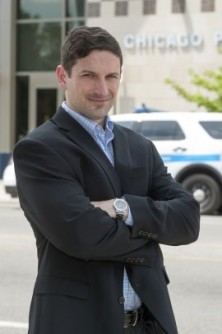 David Swedler, research assistant professor of environmental and occupational health sciences in the University of Illinois at Chicago School of Public Health. 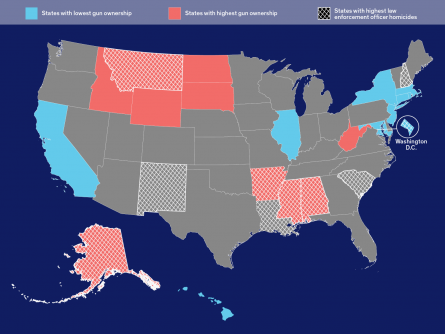 States with the highest and lowest gun ownership, and states with highest law enforcement officer homicides

Newswise — Camden and Newark, New Jersey, are perceived as two of the most violent cities in the nation, yet New Jersey’s police officers are among the least likely to get shot on the job. Montana, with its serene landscapes and national parks, has among the highest homicide rates for law enforcement officers. Why?

Previous studies have linked firearm ownership with higher overall firearm death rates in the United States and internationally. Until now, none of the studies have examined the increased risk to law enforcement personnel.

“If we’re interested in protecting police officers, we need to look at what’s killing them, and what’s killing them is guns,” says the study's lead author, David Swedler, research assistant professor of environmental and occupational health sciences in the University of Illinois at Chicago School of Public Health.

“We know that 92 percent of police officers killed in the line of duty are killed by guns, three-quarters of which are handguns,” Swedler said.

Statewide gun ownership rates were calculated using the Behavioral Risk Factor Surveillance System, an annual nationwide survey that collects data over a wide range of health topics (including household firearm ownership) as well as state-level data on gun-related suicides, which have been proven to accurately reflect gun ownership rates.Of the 782 homicides of police officers over the study period, 716 were committed using guns; 515 of them with handguns. States averaged one law enforcement officer homicide per year, but because states vary in the number of officers employed, some had higher numbers of officer homicides, while other states had none.

On average, the researchers found that 38 percent of U.S. households have at least one gun, ranging from 4.8 percent of households in the District of Columbia to 62 percent in Wyoming.

“We found that officers aren’t being killed in states with high violent-crime rates. While violent crime rates didn't track closely to officer homicide rates, it was public gun ownership that had the strongest relationship,” Swedler said.

Swedler says that one reason why high gun ownership and police officer killing are so closely linked is that many officers get shot while responding to domestic disturbance calls.

Based on their data, Swedler and his colleagues estimate that a 10 percent higher statewide firearm ownership would have resulted in 10 more law enforcement officer homicides in each state over the 15 year study period.

“Statewide firearm ownership is definitely a risk factor for police officers,” Swedler said. “Higher private gun ownership increases the frequency with which officers encounter life-threatening situations. If we care about the safety of those officers, then we need to think about them when considering state gun laws.”

Swedler’s work was funded through the Liberty Mutual-Harvard Program in Occupational Safety and Health. 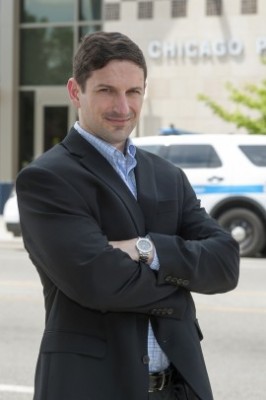 Caption: David Swedler, research assistant professor of environmental and occupational health sciences in the University of Illinois at Chicago School of Public Health. 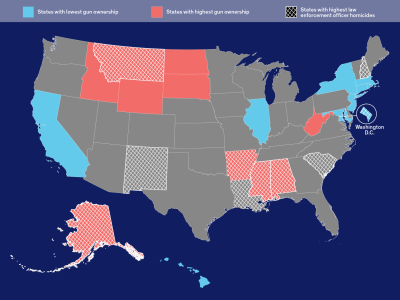