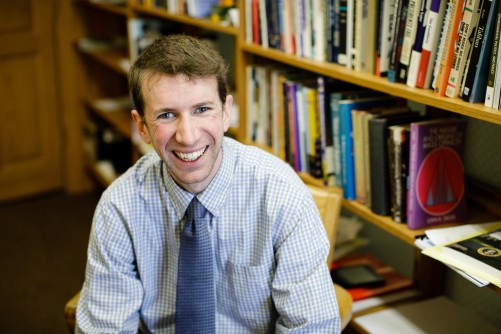 Newswise — Primary elections were created to give voters more of a voice in candidate selection before the general election. Cornell College Professor of Politics Hans Hassell has researched the topic for years and discovered there’s more to the story.

He explains his findings in his new book “The Party’s Primary,” published by Cambridge University Press, which is a project that started when he witnessed the influence party organizations and party elites had on the nomination process while he was working as a staff member on political campaigns. He noticed that sometimes the party very clearly wanted a candidate out of the process, and it would work swiftly to remove those candidates from the running.

“The common discourse on primaries, campaigns, and elections among academics has been that they are ‘candidate-centered’ and that primaries had essentially eliminated the ability of party insiders to control the process,” Hans said. “I wrote this book because I knew first-hand that wasn’t the case, and I wanted to show that. Parties and party elites become involved in the nomination process, they coordinate behind a preferred candidate, and that coordination shapes both the nomination process and the outcomes of the primary election.”

Biography:
Hans Hassell is an Assistant Professor of Politics at Cornell College. His research focuses on political institutions and, specifically, on political parties and their role in electoral politics. In particular, he studies the role of parties in shaping the field of candidates and controlling the outcomes of political primaries and nominations for the U.S. House and Senate. He is also interested in how the contextual political environment, especially aspects such as race, ethnicity, and immigration, shape political behaviors and outcomes. Some of this work has been published in the American Journal of Political Science, Journal of Politics, and Political Behavior. Hassell's book The Party's Primary: Control of Congressional Nominations will be published in the spring of 2018 with Cambridge University Press. As a scholar, Hassell is associated with Laboratories of Democracy, a non-profit research organization of political scientists that collaborates with local and state officials on field experimental research, and has acted as a co-principal investigator of the 2016 American Municipal Official Survey -- a survey of U.S. local officials that employs survey experiments as a means to study elected public officials. Hassell received his Ph.D. in Political Science from the University of California, San Diego in 2012. He graduated from Pomona College in 2007 where he also majored in Politics. While in college, Hassell worked full time as a political operative during the 2004 and 2006 election cycles on campaigns in Maine and Minnesota.