Twice as many parents whose provider didn’t discuss what to do with leftover pain pills kept prescription narcotics at home.

11-May-2016 9:05 AM EDT, by Michigan Medicine - University of Michigan contact patient services
favorite_border 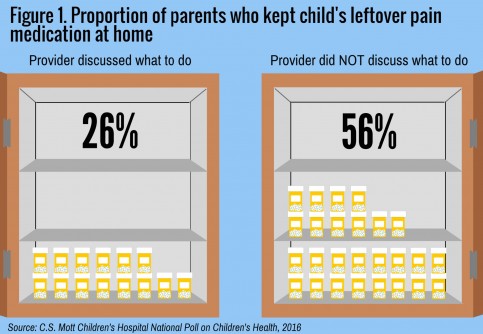 Newswise — ANN ARBOR, Mich — Nearly half of parents whose child had leftover pain medication from a surgery or illness say they kept the prescription opioids at home — representing a potential problem down the line.

Parents whose child’s provider discussed what to do with the pills, however, were far more likely to dispose them properly, according to a report from the C.S. Mott Children’s Hospital National Poll on Children’s Health at the University of Michigan.

“We found that the amount of pain medication prescribed for children is frequently greater than the amount used, and too few parents recall clear direction from their provider about what to do with leftover medication,” says Sarah J. Clark, MPH, co-director of the poll and associate research scientist in the department of pediatrics at the University of Michigan’s C.S. Mott Children’s Hospital.

“This is a missed opportunity to prevent prescription drug misuse among children. Many parents simply keep extra pain pills in their home. Those leftover pills represent easy access to narcotics for teens and their friends.”

Overall, nearly a third of parents polled reported at least one pain medication prescription for their child, most often related to surgery, illness and injury. Most prescriptions (60 percent) were for narcotics, such as oxycodone or hydrocodone.

Half of parents reported their child had leftover medication and only 8 percent returned it to the doctor or pharmacy. Another 47 percent kept the pills at home while 30 percent disposed of it in the trash or toilet, 6 percent used it for other family members and 9 percent didn’t remember what they did with them.

Twice as many parents (56 percent) with no guidelines from their provider kept leftover pain pills at home compared to parents whose providers discussed what to do with them (26 percent). Only a third of parents said their child’s provider gave instructions on disposing leftover pain medication.

“The epidemic of prescription drug abuse affects all sectors of the U.S. population, including children and teens,” Clark says.

“For adolescents, a known point of access to narcotic pain medication is leftover pills from a prior prescription. Our poll suggests we need to do a much better job of explaining this risk to parents.”

Leftover drugs should be returned to a doctor’s office or pharmacy or given to a county take-back program. The Mott report comes just as the House of Representatives considers a series of new bills to tackle the opioid crisis that has led to major policy initiatives to limit access to narcotic pain medications. The poll presents findings from a nationally representative household survey conducted among 1,176 parents with at least one child aged 5 to 17.

• Providers cannot assume that parents understand the risks of easily accessible pain medication in the home. Providers need to explain this risk to parents, and offer guidance on appropriate options (e.g., return to provider office or pharmacy; safe disposal in trash, not flushing down the toilet).

• The poll results strongly suggest that when providers do offer direction to parents, they make better decisions with leftover medication.

• In this poll, half of parents whose children had received a prescription for pain medication had pills left over. This raises a fundamental question about how providers approach the task of prescribing pain medication to children: Are they prescribing “just enough” medication for a standard recovery, or additional doses “just in case” there is prolonged pain?

• Parents need clearer guidance on all aspects of administering prescription medications for their children. This is particularly true for pain medication, which differs from the very specific manner in which other medications are handled; rather, the administration of pain medication is linked to the child’s symptoms without a strict schedule or endpoint. Ideally, all parents should have guidance in this area.

Data Source: This report presents findings from a nationally representative household survey conducted exclusively by GfK Custom Research, LLC (GfK), for C.S. Mott Children’s Hospital via a method used in many published studies. The survey was administered in January 2016 to a randomly selected, stratified group of parents age 18 and older with at least one child age 5-17 (n=1,176). Parents were selected from GfK’s web-enabled KnowledgePanel® that closely resembles the U.S. population. The sample was subsequently weighted to reflect population figures from the Census Bureau. The survey completion rate was 54% among panel members contacted to participate. The margin of error is ± 3 to 8 percentage points.