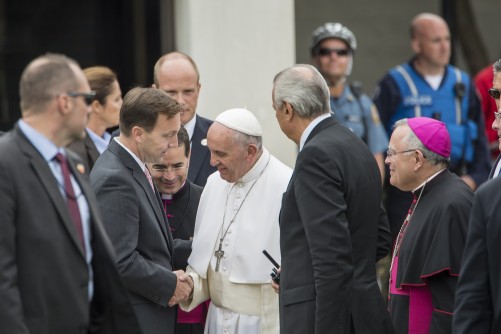 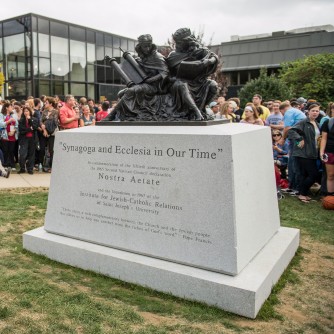 'Nostra Aetate' memorial on the campus of Saint Joseph's University.

Newswise — PHILADELPHIA (27Sept2015) – Pope Francis made an unscheduled stop at Saint Joseph’s University today, greeting campus officials, student and religious leaders, and visiting and blessing the newly dedicated statue, “Synagoga and Ecclesia in Our Time.” The bronze work by noted Philadelphia artist Joshua Koffman was installed Sept. 25 at the plaza in front of the Chapel of St. Joseph-Michael J. Smith, S.J., Memorial, commemorating the 50th anniversary of Nostra Aetate, the Vatican II document that transformed the relationship between the Catholic and Jewish faiths.

Saint Joseph’s, one of the nation’s 28 Jesuit universities and colleges, was the first collegiate institution in the United States to answer the document’s interfaith call by founding the Institute for Jewish-Catholic Relations (IJCR) in 1967. Nostra Aetate calls for dialogue with those of all religions, but particularly those of Jewish faith. Several area Jewish leaders were on hand to witness Pope Francis on campus and were acknowledged by His Holiness.

“Since his election, the Holy Father has inspired us in so many ways,” said Saint Joseph’s president Mark C. Reed, Ed.D. “His ministry and leadership style have been a topic of discussion and an example in our classrooms. He has reenergized and strengthened our student body in their Catholic faith. And he has reminded all of us of the power of humility and compassion.

“To have him actually set foot on our campus was unforgettable. This is a truly historic day for Saint Joseph’s University, Jesuit education across the country and the importance of interfaith relations.”

Dr. Reed was joined by student body president Nicholas Chingas, vice president Natalie Roche, Jesuit community rector Rev. Brendan Lally, S.J, and Edward W. Moneypenny ’64, chair of the Board of Trustees. Also greeting the Pontiff were Philip A. Cunningham, Ph.D., professor of theology and IJCR director, Adam Gregerman, Ph.D., assistant professor of Jewish studies and IJCR assistant director, and Rabbi Abraham Skorka of Buenos Aires, a longtime friend of Pope Francis and co-author with him of a best-selling book about their interfaith dialogues.

The unscheduled stop was made by the Pontiff as he was en route from St. Charles Borromeo Seminary to downtown Philadelphia for the Papal Mass that was to conclude his historic U.S. visit and the World Meeting of Families in Philadelphia. The Saint Joseph’s campus straddles City Avenue, the road that leads directly to the Seminary. His Holiness passed through the University three times earlier in the weekend and was greeted by hundreds of students, faculty, staff and alumni.

“It is a profoundly moving that Pope Francis came to Saint Joseph’s to visit ‘Synagoga and Ecclesia in Our Time’,” said Dr. Cunningham, a noted leader and scholar in Jewish-Catholic relations. “In his relationship with Rabbi Skorka and his outreach to the global Jewish community, both Pope Francis and Saint Joseph’s Nostra Aetate memorial model the friendship that will sustain our new relationship with our Jewish brothers and sisters in the years to come.”

"The Pope's blessing of the sculpture is of enormous significance to the Jewish community," added Dr. Gregerman. "It underscores the importance to the Catholic Church of Jews and Catholics learning from one another into the future." 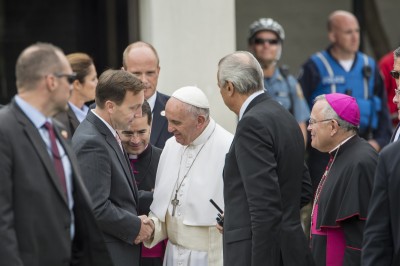 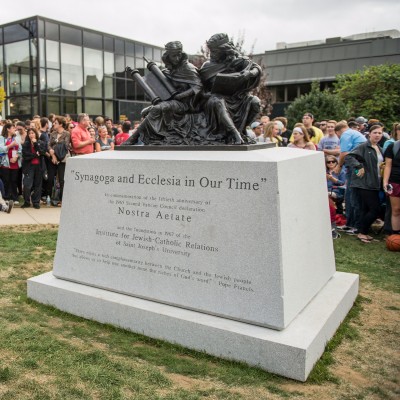