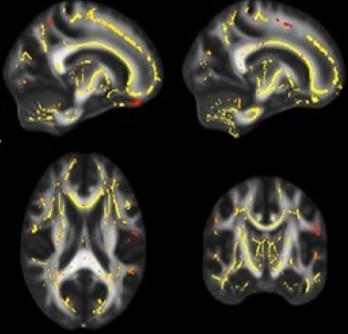 Brain imaging shows yellow and reddish pixels representing areas where the functionality of white matter is associated with higher fitness levels. The images are based on cumulative data from patients in a study showing potential links between physical fitness and deterioration of white matter. 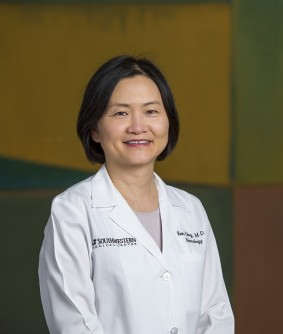 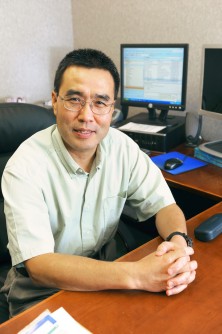 Dr. Rong Zhang, Director of the Cerebrovascular Laboratory in the Institute for Exercise and Environmental Medicine

Newswise — DALLAS – Feb. 14, 2018 – Scientists have more evidence that exercise improves brain health and could be a lifesaving ingredient that prevents Alzheimer’s disease.

In particular, a new study from UT Southwestern’s O’Donnell Brain Institute suggests that the lower the fitness level, the faster the deterioration of vital nerve fibers in the brain. This deterioration results in cognitive decline, including memory issues characteristic of dementia patients.

“This research supports the hypothesis that improving people’s fitness may improve their brain health and slow down the aging process,” said Dr. Kan Ding, a neurologist from the Peter O’Donnell Jr. Brain Institute who authored the study.

The study published in the Journal of Alzheimer’s Disease focused on a type of brain tissue called white matter, which is comprised of millions of bundles of nerve fibers used by neurons to communicate across the brain.

Unlike previous studies that relied on study participants to assess their own fitness, the new research objectively measured cardiorespiratory fitness with a scientific formula called maximal oxygen uptake. Scientists also used brain imaging to measure the functionality of each patient’s white matter.

Patients were then given memory and other cognitive tests to measure brain function, allowing scientists to establish strong correlations between exercise, brain health, and cognition.

The study adds to a growing body of evidence pointing to a simple yet crucial mandate for human health: Exercise regularly.

However, the study leaves plenty of unanswered questions about how fitness and Alzheimer’s disease are intertwined. For instance, what fitness level is needed to notably reduce the risk of dementia? Is it too late to intervene when patients begin showing symptoms?

Some of these topics are already being researched through a five-year national clinical trialled by the O’Donnell Brain Institute.

“Evidence suggests that what is bad for your heart is bad for your brain. We need studies like this to find out how the two are intertwined and hopefully find the right formula to help prevent Alzheimer’s disease,” said Dr. Rong Zhang of UT Southwestern, who oversees the clinical trial and is Director of the Cerebrovascular Laboratory in the Institute for Exercise and Environmental Medicine at Texas Health Presbyterian Hospital Dallas, where the Dallas arm of the study is being carried out.

The research builds upon prior investigations linking healthy lifestyles to better brain function, including a 2013 study from Dr. Zhang’s team that found neuronal messages are more efficiently relayed in the brains of older adults who exercise.

In addition, other teams at the O’Donnell Brain Institute are designing tests for the early detection of patients who will develop dementia, and seeking methods to slow or stop the spread of toxic proteins associated with the disease such as beta-amyloid and tau, which are blamed for destroying certain groups of neurons in the brain.

“A lot of work remains to better understand and treat dementia,” said Dr. Ding, Assistant Professor of Neurology & Neurotherapeutics. “But, eventually, the hope is that our studies will convince people to exercise more.”

The study was supported in part by the National Institutes of Health and the American Heart Association. It included collaborations with staff at the Institute for Exercise and Environmental Medicine and UT Southwestern’s Alzheimer’s Disease Center. Dr. Zhang is Professor of Neurology & Neurotherapeutics and Internal Medicine at UT Southwestern. 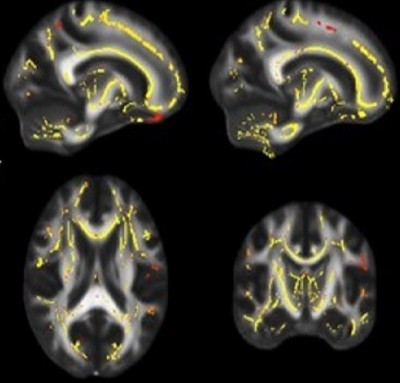 Caption: Brain imaging shows yellow and reddish pixels representing areas where the functionality of white matter is associated with higher fitness levels. The images are based on cumulative data from patients in a study showing potential links between physical fitness and deterioration of white matter. 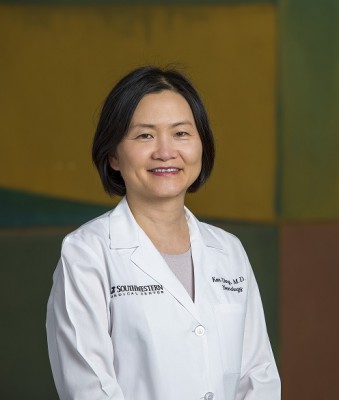 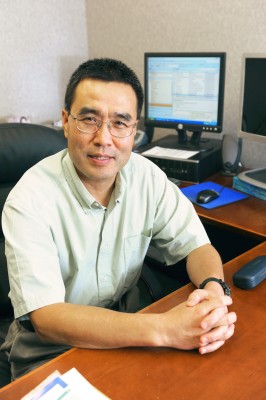 Caption: Dr. Rong Zhang, Director of the Cerebrovascular Laboratory in the Institute for Exercise and Environmental Medicine