Popcorn: The Snack with Even Higher Antioxidants Levels Than Fruits and Vegetables 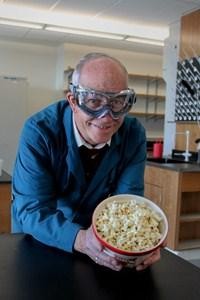 Popcorn claims the title as “perfect snack food” in a new study. Joe Vinson, PhD., study leader, readies a bowl for tests in the lab.

EMBARGOED FOR RELEASE: Sunday, March 25, 2012, Noon Eastern Time Note to journalists: Please report that this research was presented at a meeting of the American Chemical Society

A press conference on this topic will be held at 1:30 p.m. Eastern Time, March 25, 2012, in the ACS Press Center, Room 15A, in the San Diego Convention Center. Reporters can attend in person or access live audio and video of the event and ask questions at www.ustream.tv/channel/acslive.

Newswise — SAN DIEGO, March 25, 2012 — Popcorn’s reputation as a snack food that’s actually good for health popped up a few notches today as scientists reported that it contains more of the healthful antioxidant substances called "polyphenols" than fruits and vegetables. They spoke at the 243rd National Meeting & Exposition of the American Chemical Society (ACS), the world’s largest scientific society, being held here this week.

Joe Vinson, Ph.D., a pioneer in analyzing healthful components in chocolate, nuts and other common foods, explained that the polyphenols are more concentrated in popcorn, which averages only about 4 percent water, while polyphenols are diluted in the 90 percent water that makes up many fruits and vegetables.

In another surprising finding, the researchers discovered that the hulls of the popcorn –– the part that everyone hates for its tendency to get caught in the teeth –– actually has the highest concentration of polyphenols and fiber.

“Those hulls deserve more respect,” said Vinson, who is with the University of Scranton in Pennsylvania. “They are nutritional gold nuggets.”

The overall findings led Vinson to declare, “Popcorn may be the perfect snack food. It’s the only snack that is 100 percent unprocessed whole grain. All other grains are processed and diluted with other ingredients, and although cereals are called “whole grain,” this simply means that over 51 percent of the weight of the product is whole grain. One serving of popcorn will provide more than 70 percent of the daily intake of whole grain. The average person only gets about half a serving of whole grains a day, and popcorn could fill that gap in a very pleasant way.”

Vinson cautioned, however, that the way people prepare and serve popcorn can quickly put a dent in its healthful image. Cook it in a potful of oil, slather on butter or the fake butter used in many movie theaters, pour on the salt; eat it as “kettle corn” cooked in oil and sugar — and popcorn can become a nutritional nightmare loaded with fat and calories.

Vinson explained that the same concentration principle applies to dried fruit versus regular fruit, giving dried fruit a polyphenol edge. Previous studies found low concentrations of free polyphenols in popcorn, but Vinson’s team did the first study to calculate total polyphenols in popcorn. The amounts of these antioxidants were much higher than previously believed, he said. The levels of polyphenols rivaled those in nuts and were up to 15 times greater than whole-grain tortilla chips. The new study found that the amount of polyphenols found in popcorn was up to 300 mg a serving compared to 114 mg for a serving of sweet corn and 160 mg for all fruits per serving. In addition, one serving of popcorn would provide 13 percent of an average intake of polyphenols a day per person in the U.S. Fruits provide 255 mg per day of polyphenols and vegetables provide 218 mg per day to the average U.S. diet.

Michael G. Coco, an undergraduate chemistry student at the University of Scranton who participated in the study, said he benefited in several ways.

“From working on this project with Dr. Vinson, I've gained experience and many insights in doing scientific research,” said Coco. “Besides the obvious things like learning how to use instrumentation and perform analyses, I've also learned that research is extremely satisfying, especially when you discover or think of something no one else has thought of.”

The scientists acknowledged funding from the University of Scranton.

AbstractPopcorn, one of the most popular snacks foods in the world, is known for being a high fiber, healthy food. Research has found that popcorn contains significant amounts of the class of antioxidants known as polyphenols. Being a popular snack food, polyphenols from popcorn are possibly part of a large portion of the polyphenol dietary intake. Popcorn without any oils is also a 100% whole grain food, whose consumption is recommended in the Dietary Guidelines for Americans. Free and total polyphenols for 40 different kernels and ingredients have been quantified using the Folin-Ciocalteu and FRAP assays. The identity of the polyphenols have been identified using UV/Vis HPLC and LC-MS. Ferulic Acid has been identified as one of the major components. By quantifying and identifying the polyphenols in popcorn; some predictions about their bioactivity can be made.