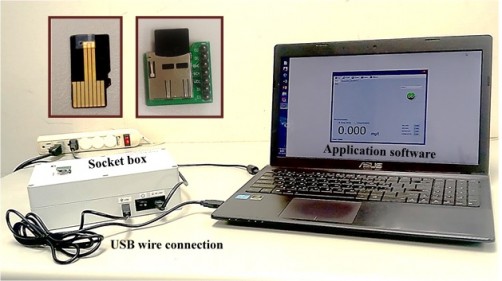 The portable measurement device with USB interface to connect to laptop. The software installed in laptop provides GUI to control measurement parameters and display the test results. Inset shows the packaged AlGaN/GaN HEMT chip connected to microSD card reader, which is mounted on the portable device. 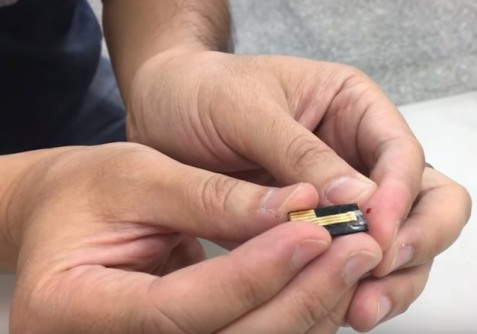 The portable biosensor can test specific cardiac markers in five minutes with a single drop of blood.

Newswise — A team of researchers from National Tsing Hua University and National Cheng Kung University, both in Taiwan, has developed a low-cost, portable medical sensor package that has the potential to alert users of medical issues ranging from severe heart conditions to cancer, according to a study published in the ECS Journal of Solid State Science and Technology.

Portable medical devices have become an integral part of holistic health care, exhibiting huge potential in monitoring, medical therapeutics, diagnosis, and fitness and wellness. When paired with benchtop point-of-care instruments used in hospitals and urgent care centers, individuals are able to both increase preventative care measures and gain a more complete picture of their health.

According to the open access paper, “Field-Effect Transistor-Based Biosensors and a Portable Device for Personal Healthcare,” researchers have reported the design, development, fabrication, and prototyping of a low-cost transistor-based device that can measure the C-reactive protein (CRP) in bloodstreams, which, when elevated, indicates inflammation that could be linked to heart attack, stroke, coronary artery disease, and a host of other medical diagnosis.

“This device will eventually be made as a small handheld device, which can easily connect with a smartphone through Bluetooth or WiFi,” said Yu-Lin Wang, professor at National Tsing Hua University and co-author of the study. “The data can be collected in an app and users can send that data to their doctors. The operation is just as simple as the blood sugar meter, where anyone can do the test with one drop of blood anywhere, anytime.”

Because of the high salt concentration in blood samples, the accuracy and performance of silicon-based field-effect transistor (FET)-based biosensors often suffers. Wang and the team of researchers recognized this issued and developed a GaN-based high electron mobility transistor (HEMT) in response, which does not suffer from the same performance degradation due to the chemical inertness of GaN. While GaN is more expensive than silicon, advances in micro-fabrication allow for the development of an extremely small HEMT, greatly reducing cost and paving the way for an affordable device upon mass production.

While FET-based biosensors exhibit a host of potential benefits, there are significant technological barriers to overcome before the devices are applicable. Because FETs are extremely sensitive, yet have the potential to be unstable, it is often difficult to develop a sensor that produces consistent results. In order to make their device reliable on top of being affordable, the team began pursuing new, innovative ways to cause the least amount of disruption as possible. This was achieved by using a measurement system of very short pulses.

“We also developed a methodology to overcome the charge-screening effect, which is frequently seen in FET-based biosensors,” Wang said. “This methodology allows us to detect the target protein without needing to dilute or de-salt the clinical samples. Thus, we do not need to use automatics in our sensor or device, which can make the system simple and cost-effective. The operation is simple and everyone can do it. Just drop and click.”

Through these efforts, the research team was able to develop a system that is not only accurate and affordable, but incorporates a new methodology on the sensor itself.

“I believe that what we have created is a technology that has the potential to be used by billions of people,” Wang said.

The device’s ability to alert individuals of elevated CRP levels could be potentially life-saving. Currently, individuals who would most benefit from this technology would be those with or at risk for cardiovascular disease, such as heart attack or heart failure. For example, some individuals may not have hallmark symptoms, such as crushing chest pain or discomfort, when it comes to heart attacks. However, the portable biosensor can instantly test specific cardiac markers in the blood that could alert individuals that they are having a heart attack, even without displaying symptoms. Alternatively, this device could be used by first responders to quickly and accurately diagnose patients.

Individuals with chronic heart failure can monitor biomarkers with this device, which if elevated, can indicate your risk of heart failure. Routinely monitoring these biomarkers could be effective at reducing hospital readmission rates, which could lead to improved quality of life and lower hospital medical expenses.

“The test only takes five minutes and one drop of blood, and everybody can just intuitively know how to use this device,” Wang says. “The cost of the device will be very low, so this device is affordable for everyone. When the immobilized receptors, such as aptamer or antibody are changed, then different biomarkers can be tested. Many disease markers can be detected with this device.”

“This work is a demonstration of a low-cost, portable medical sensor package,” says Fan Ren, ECS Journal of Solid State Science and Technology technical editor. “With a single drop of blood of plasma, this novel sensor package can be used to detect a heart attack or even a tumor.”

The team has already developed a handheld device prototype, which has successfully demonstrated accurate, consistent results. Wang believes that within one year, the device will be compatible with smartphones and cloud computing.

“We are collaborating with hospitals and industries, and trying to make this device become a real product,” Wang says. “I think in the future this device will collect huge data, which will be analyzed by artificial intelligence and become part of the ecosystem of the Internet of things. This device will play an important role.”