1-Apr-2016 4:05 PM EDT, by University of Alabama at Birmingham
favorite_border 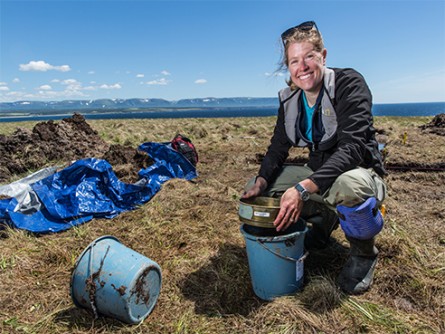 Newswise — BIRMINGHAM, Ala. – University of Alabama at Birmingham archaeologist Sarah Parcak, Ph.D., along with a team of other leading experts, has discovered evidence of what may be North America’s second Viking site.

With the use of pioneering satellite imagery analysis, excavation and investigation of archeological evidence, the team has uncovered what could be the first new Norse site to be discovered in North America in over 50 years. If confirmed by further research, the site at Point Rosee in Newfoundland will show that the Vikings traveled much farther into North America than previously known, pushing the boundary of their explorations over 300 miles to the southwest.

The discovery is the subject of a two-hour special called “Vikings Unearthed.” The program will first stream online at http://www.pbs.org/nova Monday, April 4, at 2:30 p.m. CT to coincide with the premiere of a 90-minute version of the film in the U.K. on BBC One. A two-hour U.S. broadcast will follow Wednesday, April 6, at 8 p.m. CT on PBS.

To date, scientists have known of only one other Viking site, found on the very northern tip of Newfoundland in Canada, at L’Anse Aux Meadows. In the 1960s, archaeologists uncovered the foundations of 1,000-year-old Viking buildings, signs of metalworking, iron nails and artifacts. The site appeared to pre-date Columbus’ voyages to the New World by some 500 years, confirming that Norse explorers had reached North America as suggested in the Vinland sagas. For more than 50 years, scientists have searched for another Norse site.

Using infrared images from 400 miles in space, Parcak and her team looked at tens of thousands of square kilometers along the Eastern Seaboard of the U.S. and Canada. Images taken in Point Rosee revealed possible man-made shapes under discolored vegetation. This intriguing evidence suggests the Vikings traveled farther south than previously known. The Newfoundland project was co-directed by Gregory Mumford, Ph.D., Parcak’s husband and professor in the UAB College of Arts and Sciences Department of Anthropology. Preliminary excavations took place over a period of two and a half weeks in June 2015.

Parcak recently made international headlines when she was named winner of the 2016 TED Prize. She is an expert in satellite remote sensing for archaeology and wrote the first textbook in the field. Her methods have helped locate 17 potential pyramids in Egypt, in addition to 3,100 forgotten settlements and 1,000 lost tombs. She has also made major discoveries throughout the Roman Empire. She is a National Geographic Senior Fellow, TED Senior Fellow and a professor of archaeology at UAB. Parcak is also the founder and director of the UAB Laboratory for Global Observation.

About UABKnown for its innovative and interdisciplinary approach to education at both the graduate and undergraduate levels, the University of Alabama at Birmingham is an internationally renowned research university and academic medical center, as well as Alabama’s largest employer, with some 23,000 employees, and has an annual economic impact exceeding $5 billion on the state. The five pillars of UAB’s mission include education, research, patient care, community service and economic development. UAB is a two-time recipient of the prestigious Center for Translational Science Award. Learn more at http://www.uab.edu. UAB: Knowledge that will change your world.