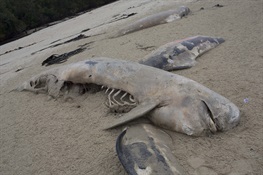 1. Researchers published results of a mass stranding of long-finned pilot whales (Globicephala melas) in Southern Chile, where some 124 animals stranded and died in July of 2016.
2. Due to an advance state of decomposition, researchers were unable to pinpoint an exact cause of death, but noted several large marine storms in the area just prior to the stranding, theorizing that large waves combined with strong tides could have impacted the whales.
3. The authors note the need for more rapid, coordinated responses to stranding events, which are expected to rise due to climate change.