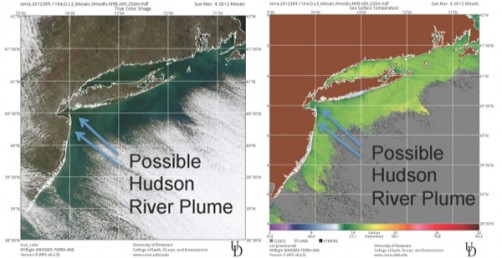 Newswise — With millions of gallons of raw sewage dumping into New Jersey waterways following Hurricane Sandy, University of Delaware scientists are using satellites to help predict the sludge’s track into the ocean.

“Technically, you can’t identify raw sewage from a satellite, but you can find river discharge that you suspect has raw sewage,” said Matthew Oliver, assistant professor of oceanography in the College of Earth, Ocean, and Environment. “The reason why is because river discharge usually has a very different temperature and color than the surrounding waters.”

Oliver and his students have previously examined the ability of satellites to detect coastal plumes.

Oliver participates in the Mid-Atlantic Regional Association Coastal Ocean Observing System (MARACOOS), which has been carefully following Hurricane Sandy and its after effects. Headquartered at UD, the organization aggregates ocean data collected along the Atlantic coast from Massachusetts to North Carolina to share with researchers, government officials and the public.

As the storm headed up the coast, the New Jersey Department of Environmental Protection (NJDEP) contacted MARACOOS for information. Xiao-Hai Yan, Mary A. S. Lighthipe Professor of Oceanography and director of the Center for Remote Sensing, worked to install the satellite dish at UD to provide real-time coverage of regional disaster events.

“We at UD provide satellite support for MARACOOS,” Yan said. “So that is why we have our images focused on that area right now.”

According to NJDEP, Hurricane Sandy damage took several wastewater treatment facilities offline, causing untreated sewage into certain waterways. Recreational boaters, anglers and crabbers were advised on Friday, Nov. 2, to avoid those waterways and not eat any fish, crustaceans or shellfish from these waters due to contamination from bacteria and viruses. Additional advisories were issued on Nov. 5 and Nov. 6.