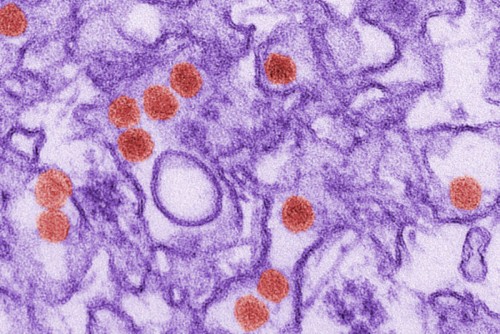 Centers for Disease Control and Prevention

A transmission electron micrograph image of the Zika virus.

Newswise — Scientists potentially have found a way to disrupt Zika and similar viruses from spreading in the body.

A team at Washington University School of Medicine in St. Louis has identified a single gene pathway that is vital for Zika and other flaviviruses to spread infection between cells. Further, they showed that shutting down a single gene in this pathway — in both human and insect cells — does not negatively affect the cells themselves and renders flaviviruses unable to leave the infected cell, curbing the spread of infection.

The study, published June 17 in Nature, points to a potential drug target for Zika and other flaviviruses such as dengue and West Nile that have major impacts on public health.

“We wanted to find out if we could identify genes present in the host cells that are absolutely required by the virus for infection,” said senior author Michael Diamond, MD, PhD, the Herbert S. Gasser Professor of Medicine. “Out of about 19,000 genes that we looked at, we only found nine key genes that the virus relies on for infection or to spread. All of them are associated with an important part of the cell that processes viral particles, which is essential to spreading the infection.”

To identify genes that flaviviruses rely on, Diamond and his colleagues utilized a gene editing technology called CRISPR that is capable of selectively shutting down individual genes. Viruses must hijack host cells to replicate and spread, making them dependent upon the genetic material of the organisms they infect. If a cell lacks a gene that the virus requires for infection, the virus will be stopped in its tracks, and the cell will survive. Such evidence indicates that the missing gene is vital to viral spread and should be studied further.

Of the nine key genes Diamond and his colleagues identified, one called SPCS1, when disabled, not only reduces viral infection but appears to have no adverse effects on the cells the scientists studied. The researchers performed the first experiments on West Nile virus and then showed that the same results held true for other Flaviviridae family members, including Zika, dengue, yellow fever, Japanese encephalitis and hepatitis C viruses.

While the absence of this gene shut down the spread of flaviviruses, the researchers found that eliminating the gene had no detrimental effect on other types of viruses, including alphaviruses, bunyaviruses and rhabdoviruses.

“Flaviviruses appear to be uniquely dependent on this particular gene to release the viral particle,” Diamond said. “In these viruses, this gene sets off a domino effect that is required to assemble and release the viral particle. Without it, the chain reaction doesn’t happen and the virus can’t spread. So we are interested in this gene as a potential drug target because it disrupts the virus and does not disrupt the host.”