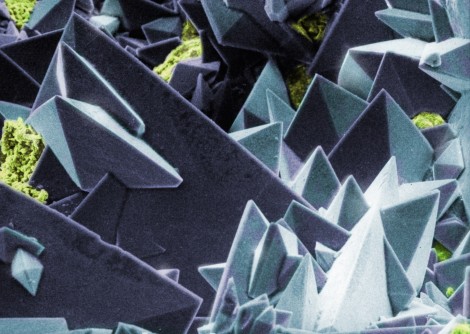 Pictured is the surface of a kidney stone with calcium oxalate crystals.

Newswise — Anyone who has suffered from kidney stones is keenly aware of the lack of drugs to treat the condition, which often causes excruciating pain.

A new mouse study, however, suggests that a class of drugs approved to treat leukemia and epilepsy also may be effective against kidney stones, researchers at Washington University School of Medicine in St. Louis report.

The research is available online in the Journal of the American Society of Nephrology.

“We’re hopeful this class of drugs can dissolve kidney stones because its effects on reducing calcium and magnesium are exclusive to kidney cells,” said senior author Jianghui Hou, PhD, assistant professor of medicine. “In the mice, we achieved dramatic effects at a fraction of the dosage used to treat leukemia and without significant side effects.”

Most kidney stones form when the urine becomes too concentrated, allowing calcium and magnesium to crystallize and stick together. Intense pain develops when stones get stuck in the urinary tract and block the flow of urine.

Diet can play a role in the condition. Not drinking enough water or eating a diet with too much salt, which promotes calcium to be released into the urine, increases the risk of stones. Some people also are genetically prone to developing kidney stones, and they naturally release too much calcium into the urine.

Typically, doctors recommend drinking lots of water to help pass kidney stones from the body. Thiazide, a type of drug used to treat high blood pressure, sometimes is prescribed to treat the stones because it reduces calcium in the urine. But the drug also increases magnesium in urine, countering its effectiveness against kidney stones.

In the new study, Hou and his colleagues showed that Vorinostat, approved to treat leukemia and epilepsy, and trichostatin A, an antifungal drug, mimic a natural process in the kidney that reabsorbs calcium and magnesium into the urine.

Kidneys, in addition to filtering waste from the blood into the urine, also play an essential role in reclaiming minerals that the body needs to carry out basic functions of life. Normally, some calcium and magnesium in the blood are filtered into the urine and then reabsorbed back into the blood, depending on the body’s need for these essential minerals.

Hou’s earlier work showed this process is heavily dependent on the activity of a gene called claudin-14. When the activity of claudin-14 is idled, the kidney’s filtering system works like it’s supposed to. But when the gene is activated, calcium and magnesium are blocked from re-entering the blood.

The gene’s expression is controlled by two snippets of RNA, a sister molecule of DNA, Hou’s previous research has shown.

As part of the new study, Hou and his colleagues found that Vorinostat and trichostatin A do not act directly on the claudin-14 but mimic these so-called micro-RNA molecules, keeping the activity of the gene in check. That the drugs can modify the activity of micro-RNAs make them attractive as potential treatments for kidney stones.

In the mice, small doses of Vorinostat, for example, reduced calcium levels in the urine by more than 50 percent and magnesium levels by more than 40 percent. Similar results were noted for trichostatin A.

“Kidney cells were very sensitive to the drug,” Hou explained. “We used one-twentieth of the dose typically used in humans and achieved significant results. We now want to test the drug in clinical trials for patients with kidney stones.”

Mice don’t develop kidney stones, so it will be important to test the drugs against kidney stones in patients, but the current study provides proof of principle that HDAC inhibitors regulate the same pathway that leads to kidney stones, he said.

Journal of the American Society of Nephrology, July 30, 1014