8-Apr-2014 12:00 AM EDT, by University of Arkansas, Fayetteville
favorite_border 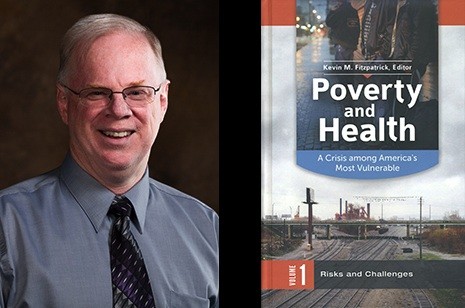 Kevin Fitzpatrick, professor of sociology, University of Arkansas, and editor of Poverty and Health: A Crisis among America's Most Vulnerable.

Newswise — FAYETTEVILLE, Ark. – When it comes to health and poverty, place matters. Poverty and Health: A Crisis among America’s Most Vulnerable is a collection of in-depth essays offering history, background and insight into contemporary health issues facing poor people in the United States, including the crucial factor of place in relation to health.

“With zip code being one of the most important factors to understanding the complexity of health risk in our nation, the structured inequality across the metropolitan landscape continues to complicate health care accessibility and equal health outcomes for persons across all socio-economic groups,” according to sociologist Kevin M. Fitzpatrick of the University of Arkansas.

Fitzpatrick edited two volumes of essays by an interdisciplinary group of authors with diverse views on this critical relationship between health and poverty. The essays provide readers with “just a glimpse into the poverty and health paradox” as well as an examination of the crucial nexus of health and place.

“With the implementation of the Affordable Health Care Act, we can finally begin to move the needle toward addressing the dire health care needs of the impoverished who have fallen through the cracks for so many years,” Kirkpatrick said.

More than half of those who live in poverty have a serious health problem, with poor children three to five times more likely to have chronic health issues than other children. One crucial factor is place. The 2012 National Survey of Children’s Health includes many examples of how the social, economic and political climate of a state can affect the health of the residents of that state, particularly its poorest residents.

“From birth to death – across racial and ethnic, gender, and socioeconomic boundaries – health and place are inextricably linked,” Fitzpatrick, wrote in his introduction to the second volume of essays.

Childhood obesity is a stark example: There is nearly a 20 percent margin between the states with the highest and lowest rates of childhood obesity. Such a disparity suggests the need for place-based strategies for health promotion. Poverty and Health provides insights into programming and policy that can improve the health and lives of the most disadvantaged populations, including the elderly, homeless people and low-income minority youth.

Poverty and Health: A Crisis Among America’s Most Vulnerable is published in two volumes by Praeger. The first volume is subtitled Risks and Challenges and the second The Importance of Place in Determining Their Future.

Fitzpatrick holds the Bernice Jones Endowed Chair in Community and is a professor in the department of sociology and criminal justice in the J. William Fulbright College of Arts and Sciences at the University of Arkansas. His research has focused on community and the mental health of at-risk populations. In addition, he has ongoing projects related to childhood obesity, homelessness and mental health, and community-level indicators related to domestic terrorism. The U.S. Department of Homeland Security, the National Institute of Justice, and the Harvey and Bernice Jones Trust fund his current research.