Practice for Life: Making Decisions in College, from Wellesley College and Bowdoin College Faculty, Presents Practical Advice, Surprising Research, and a Revolutionary Case for the Value of Liberal Education 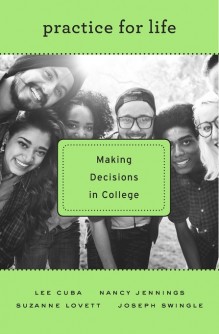 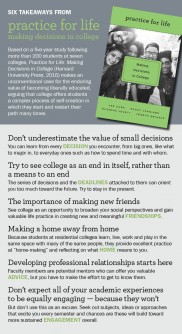 Key Takeaways for College Students:● Becoming liberally educated is a complex and messy process involving making decisions—and learning from them. You can learn from every decision you encounter in college, from big ones, like what to major in, to everyday ones such as how to spend your time and with whom.● Try to see college as an end in itself, rather than a means to an end. The series of decisions and the deadlines attached to them can orient you too much toward the future. Try to stay in the present.● Developing professional relationships starts in college. Faculty members are potential mentors who can offer you valuable advice, but you have to make the effort to get to know them.● Don’t expect all of your academic experiences to be equally engaging—because they won’t be. But don’t use this as an excuse. Seek out subjects, ideas or approaches that excite you every semester, and chances are these will build toward more sustained engagement overall.

Newswise — Wellesley, Mass./Brunswick, Me.—Across the country thousands of recent high school graduates are excitedly—and probably with some nervousness—making plans for their first semester of college. A new book, Practice for Life: Making Decisions in College, co-written by faculty members at two of the country’s most prestigious liberal arts colleges, is poised to change the way these students and their parents approach this next stage of their life. In recasting college as a place where students can learn to confront the decisions they make as opportunities rather than obstacles—as moments to take risks and learn about themselves—Practice for Life asserts that a liberal education is the most practical education a person can receive. The book is published by Harvard University Press and will be released August 2016.

With a clarion call that runs counter to established ideas about college life and learning, Practice for Life: Making Decisions in College will generate a new level of discourse about the enduring value of liberal education. Lee Cuba, professor of sociology at Wellesley College; Nancy Jennings, associate professor of education emerita at Bowdoin College; Suzanne Lovett, associate professor of psychology at Bowdoin College; and Joseph Swingle, senior lecturer in sociology at Wellesley College, have created what is simultaneously a practical guidebook to help parents and students understand the value of making thoughtful decisions in college, as well as eye-opening research that challenges the long-accepted importance of the college major, among other changes to the status quo in higher education.

“We believe that our book, based on data from a five-year study that followed over 200 students at seven colleges, will help high school students heading for college learn that there is no single path to success in college,” said Cuba. “We believe it will also help their parents see how daily, seemingly mundane choices affect their child’s college experiences, for example, getting to know your first-year advisor even though you don’t think you have much in common with her. At the same time the book puts into perspective the value of ‘big’ decisions, like choosing a major. And we hope both students and their parents will acquire a greater appreciation for how the decision-making process in college is practice for life after college.”

Not only is liberal education still relevant, the authors argue, but in the 21st century becoming liberally educated will become even more valuable. Unlike the narrow tracks students pursue in pre-professional or technical college programs, the broad curriculum students receive as part of a liberal education offers unique advantages in terms of learning about people and viewpoints different than their own, and acquiring practice at how to negotiate the challenges they will face after college.

"Whether a particular college is 'worth it' is often described using metrics such as starting salaries of graduates or the number of students who get into professional schools,” said co-author Jennings. “These measures are not unimportant, but they don't capture what may be the real value of a liberal education, which is that it offers students the opportunity to engage in the complex process of self-creation and re-creation, one that begins in college but continues far beyond graduation. This is the practice for life that the book is about."

Co-author Joseph Swingle added, "In listening to students talk about their college experiences—both the high points and low points—we gained insights into the process of a liberal education and the importance of confronting decisions as opportunities rather than obstacles. Over and over again, students who adopted a somewhat adventurous approach to college, or were in some way steered to do so, benefited greatly. Those who did not often regretted their more ‘play it safe’ orientation.”

“The former students came to recognize that everyday decisions can be important moments in which they can reset their path through college allowing them to make new connections, become re-engaged in their classes or major, or perhaps even pursue a career they had never envisioned,” elaborated co-author Lovett. “By learning to reflect upon the choices they make, students acquire a deeper appreciation for who they are and what they want out of life.”

About Bowdoin CollegeBowdoin College has been educating leaders on the coast of Maine since the dawn of the American republic. Founded in 1794, Bowdoin is a highly selective liberal arts college of approximately 1,800 students of distinction from across America and around the world. 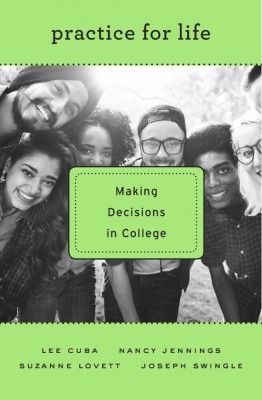 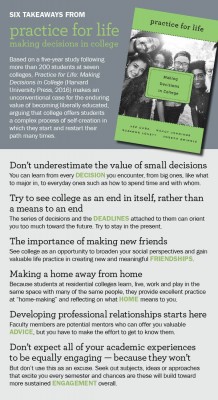