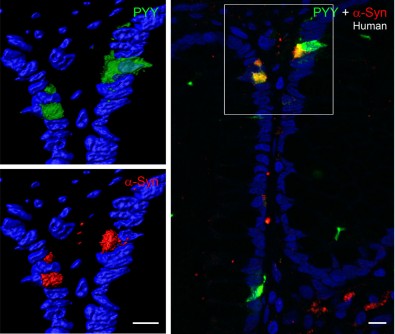 An image of tissue from a human colon uses fluorescent staining to show the presence of the protein alpha-synuclein (red) inside gut endocrine cells (green).

Newswise — DURHAM, N.C. – Recent research on Parkinson’s disease has focused on the gut-brain connection, examining patients’ gut bacteria, and even how severing the vagus nerve connecting the stomach and brain might protect some people from the debilitating disease.

But scientists understand little about what’s happening in the gut -- the ingestion of environmental toxins or germs, perhaps -- that leads to brain damage and the hallmarks of Parkinson’s such as tremors, stiffness and trouble walking.

Duke University researchers have identified a potential new mechanism in both mice and human endocrine cells that populate the small intestines. Inside these cells is a protein called alpha-synuclein, which is known to go awry and lead to damaging clumps in the brains of Parkinson’s patients, as well as those with Alzheimer’s disease.

According to findings published June 15 in the journal JCI Insight, Duke researchers and collaborators from the University of California, San Francisco, hypothesize that an agent in the gut might interfere with alpha-synuclein in gut endocrine cells, deforming the protein. The deformed or misfolded protein might then spread via the nervous system to the brain as a prion, or infectious protein, in similar fashion to mad cow disease.

“There is abundant evidence that misfolded alpha-synuclein is found in the nerves of the gut before it appears in the brain, but exactly where this misfolding occurs is unknown,” said gastroenterologist Rodger Liddle, M.D., senior author of the paper and professor of medicine at Duke. “This is another piece of evidence that supports the hypothesis that Parkinson's arises in the gut.”

Alpha-synuclein is the subject of much ongoing research on Parkinson’s, as it’s the main component of Lewy bodies, or toxic protein deposits that take up residence in brain cells, killing them from the inside. The clumps form when alpha-synuclein develops a kink in its normally spiral structure, making it ‘sticky,’ and prone to aggregating, Liddle said.

But how would a protein go from traveling through the inner-most ‘tube’ of the intestine, where there are no nerve cells, into the nervous system? That’s a question Liddle and colleagues sought to answer in a 2015 manuscript published in the Journal of Clinical Investigation. Although the main function of gut endocrine cells is to regulate digestion, the Duke researchers found these cells also have nerve-like properties.

Rather than using hormones to communicate indirectly with the nervous system, these gut endocrine cells physically connect to nerves, providing a pathway to communicate with the brain, Liddle said. The researchers demonstrated this in a stunning time-lapse video (2015, Journal of Clinical Investigation) in which a gut endocrine cell is placed under the microscope near a neuron. In just a few hours, the endocrine cell moves toward the neuron and fibers appear between them as they establish communication.

Liddle and other scientists were astonished at the video, he said, because the endocrine cells -- which are not nerves -- were behaving like them. This suggests they are able to communicate directly with the nervous system and brain.

With the new finding of alpha-synuclein in endocrine cells, Liddle and colleagues now have a working explanation of how malformed proteins can spread from the inside of the intestines to the nervous system, using a non-nerve cell that acts like a nerve.

Liddle and colleagues plan to gather and examine the gut endocrine cells from people with Parkinson’s to see if they contain misfolded or otherwise abnormal alpha-synuclein. New clues about this protein could help scientists develop a biomarker that could diagnose Parkinson’s disease earlier, Liddle said.

New leads on alpha-synuclein could also aid the development of therapies targeting the protein. Scientists have been investigating treatments that could prevent alpha-synuclein from becoming malformed, but much of the research is still in its early stages, Liddle said.

“Unfortunately, there aren’t great treatments for Parkinson’s disease right now,” he said. “It’s conceivable down the road that there could be ways to prevent alpha-synuclein misfolding, if you can make the diagnosis early.”

In addition to Liddle, study authors include Rashmi Chandra of Duke, Annie Hiniker and Yien-Ming Kuo of the University of California, San Francisco (UCSF), and Robert L. Nussbaum of UCSF and the Invitae Corporation.

The research was supported by the National Institutes of Health (R01 DK098796, R01 DK109368), the U.S. Department of Veterans Affairs (BX002230), the Duke Clinical & Translational Science Institute (UL1TR001117), and the UCSF Program for Breakthrough Biomedical Research, which is funded in part by the Sandler Foundation.

Caption: In 2015, Liddle and colleagues demonstrated that gut endocrine cells -- although they are not nerves -- behave like them. Here, a gut endocrine cell physically connects to a neuron in a matter of hours.