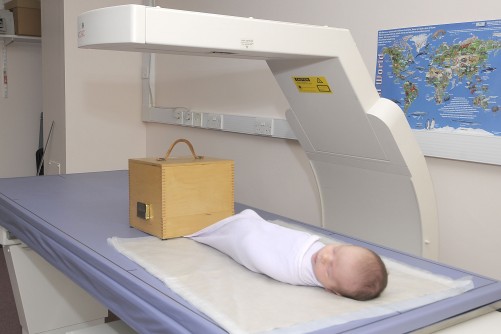 Credit: The University of Southampton

Rowen Hall having a DXA scan

Newswise — Vitamin D supplementation during pregnancy may lead to stronger bones in babies born during the winter months, a new Southampton study has shown.

Women were randomised to take either 1000 units (25 microgrammes) of vitamin D every day or a matched placebo capsule from 14 week’s gestation until delivery of the baby.

The study was funded by the charity Arthritis Research UK, with further funding support from the MRC, National Institute for Health Research and the Bupa Foundation and has been published in the Lancet Diabetes and Endocrinology.

Results showed that this dose of vitamin D was highly effective at increasing vitamin D levels in the mother. More than 80 per cent of women who had received the supplement had satisfactory levels of vitamin D when measured in late pregnancy (the point at which most calcium bone mineral is transferred from mother to baby) compared with around 35 per cent in the placebo group.

However further analysis, looking at when the baby was born, showed that the babies born during the winter months to mothers who had taken the vitamin D supplement had a greater bone mass than winter babies born to mothers who received the placebo (mean bone mass 63.0g in vitamin D group vs 57·5g in the control).

The research team believe that because better bone mass at birth is likely to lead to stronger bones in older age, this improvement could result in reduced risk of broken bones, not just as a child, but as an older adult.

Professor Nicholas Harvey, Professor of Rheumatology and Clinical Epidemiology at the MRC Lifecourse Epidemiology Unit, University of Southampton, added: "Babies’ bones strengthen during the last stages of pregnancy. Since sunlight is our most important source of vitamin D, mothers’ levels of vitamin D tend to drop from summer to winter, and babies born in the winter months tend to have lower bone density than those born during the summer. The MAVIDOS Trial has given us the first evidence that supplementing mothers with vitamin D during pregnancy counteracts the seasonal drop in maternal vitamin D levels and may help to ensure good bone development in these winter births.”

Co-author Cyrus Cooper, Professor of Rheumatology and Director of the MRC Lifecourse Epidemiology Unit, University of Southampton, adds: "Our unit seeks to develop interventions to improve bone health early in life. We found that vitamin D is safe and effective in raising levels in mothers whose babies are born during winter months.”

Stephen Simpson, Director of research and programmes at the charity, Arthritis Research UK, says: “This is an important study which shows that vitamin D supplementation for pregnant women can help increase bone strength in children born in winter months. Strong bones in childhood are likely to lead to a reduced risk of osteoporosis and fractures later in life, which are associated with disability and loss of independence. As a charity we are committed to funding research such as this, which can shed light on ways to prevent the development of painful, debilitating conditions like osteoporosis.”