Preparing Plants for our Future Climate 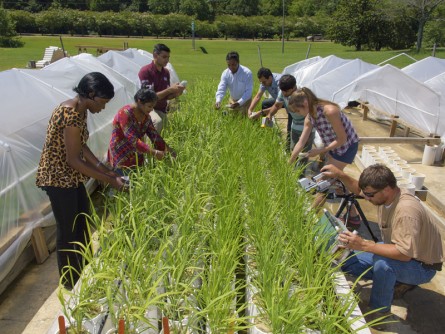 A team of researchers examines rice plants for signs of stress caused by their environment. 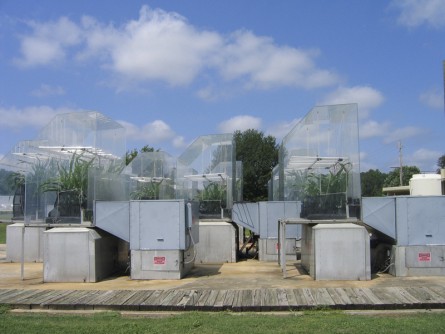 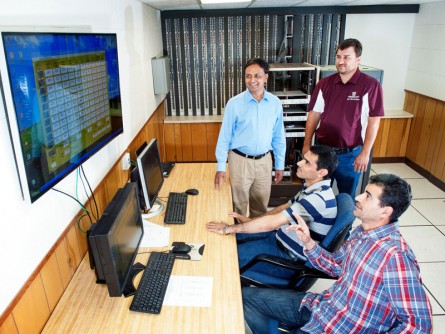 Newswise — February 26, 2020 – Planning is something we all do. As individuals, we may be planning for next weekend or our future retirement.

Farmers and plant breeders are also planning for a future. The crops we currently depend on will need grow under different conditions – due to climate change.

Some weather conditions are easy to control. Scientists can set the temperature in a greenhouse and control how much water each plant receives. It is not as easy to change earth’s atmosphere.

However, changes in our atmosphere are a part of climate change. Carbon dioxide is one greenhouse gas of concern.

The presence of carbon dioxide in the atmosphere is not all bad. In fact, plants need it to grow. In photosynthesis, plants use sunlight and carbon dioxide to make sugars. So, more carbon dioxide means plants can grow faster.

Raja Reddy, a professor at Mississippi State University, studies how climate change affects plants. Reddy works together with crop breeders who are planning for future conditions. Breeders are seeking varieties that can handle drought and warmer temperatures.

Reddy and colleagues started to wonder if the way plants respond to conditions like drought will change when there is more carbon dioxide in the atmosphere.

To test this, the team used a unique greenhouse facility. Researchers increased the carbon dioxide inside the greenhouse to represent our future atmosphere.

“It is important for breeders to test crops under the most realistic set of future conditions possible,” says Reddy. “When identifying crops that will be tolerant of drought, breeders need to know that tolerance will be maintained when there is more carbon dioxide in the atmosphere.”

Fourteen rice cultivars were grown using both present and future atmospheric conditions. “Rice is one of the most important grain crops in the world, so it is particularly important to know how rice will respond to a new climate,” explains Reddy.

Under both the current and future conditions, the research team investigated additional variables. These included the temperature of the greenhouse and the amounts of light and water rice plants received. Warmer temperatures, less water and light exposure represent environmental stresses plants will face in the future.

Generally, plants grown under future carbon dioxide levels were larger. Rice height and leaf area were larger above ground, and root systems were larger below ground.

When looking at the response of rice plants to stressors like drought, the pattern was similar for both present and future carbon dioxide levels. In other words, increased growth in the atmosphere with more carbon dioxide does not affect how the plant handles stress.

Reddy feels this is positive news. “What breeders are doing to plan for the future should hold up well,” he says. “The existing research to identify drought and heat tolerant rice can assume that those cultivars will maintain the desired traits as carbon dioxide levels increase. It also means that breeders can screen crop varieties without altering carbon dioxide levels, which is hard to do in most greenhouses.”