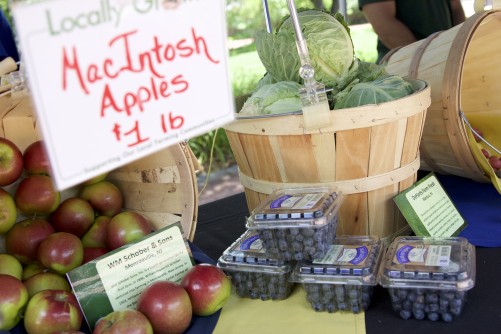 Researchers at the University of Delaware studied the behavior of watermelon consumers and found that participants were more willing to pay a premium for fruit labeled as grown on preserved farmland than they were for fruit with no label. The research indicates that labeling fruit in this manner could provide farmers with a major boost.

Newswise — Economic research has shown that people are willing to pay more for local produce, which satisfies consumer demand for fresh food from their region and also helps farmers earn money to keep their land in farming and competitive with other uses.

But a new University of Delaware study wanted to find out whether people would also be willing to pay a premium for produce — specifically watermelons — that came from preserved agricultural land.

They found that consumers would, with study participants most willing to pay a premium for watermelons labeled as both local and from preserved farmland.

The study, which was conducted over the summer and was the first of its kind to tease out the local premium versus the preserved land premium, was led by Josh Duke and John Bernard, professors in the Department of Applied Economics and Statistics (APEC), through a United States Department of Agriculture (USDA) Federal-State Marketing Improvement Program (FSMIP) grant.

The two professors worked with Sara Albrecht and Greg Vitz, both master’s degree students in the College of Agriculture and Natural Resources (CANR), on the project.

Duke said it is important for local farms to market their products to their greatest advantage and that it is especially important in regions like Delaware, where development pressure makes it imperative that farms enhance their profitability.

“Dr. Bernard and I were interested in this local premium issue and we had a hypothesis that maybe people are also interested in produce that is grown on farms that have been legally preserved,” said Duke.

Because of this, Duke said the researchers felt that “Delaware is the perfect laboratory to investigate if people were also willing to pay a premium for produce that comes from preserved land.”

Duke said that they decided to use watermelons for their research because “we felt like it was a significant Delaware commodity. We wanted to make sure there was a big presence, and also it would be ripe at a perfect time in the summer season.”

“We had watermelons with no label, a label that signified it was grown on a farm in a watermelon association, a preserved farm label that we came up with for the project, and then we had both of those labels together, so there were four different categories,” said Vitz.

Bernard said, “The different locations allowed us to see if preserved farmland has a value to consumers outside the state it is in and if farmers’ market consumers have higher premiums for local and preserved.”

Overall they had 326 participants and found that there was a statistically significant difference between the premiums participants were willing to pay for the preserved farm label and no label.

“The premiums in increasing order were no label, the local association label, the preserved farm label, and then the combination of the two of them was the one they’d be willing to pay the most for,” said Albrecht.