Preserving Patients’ Sanity in the Hospital 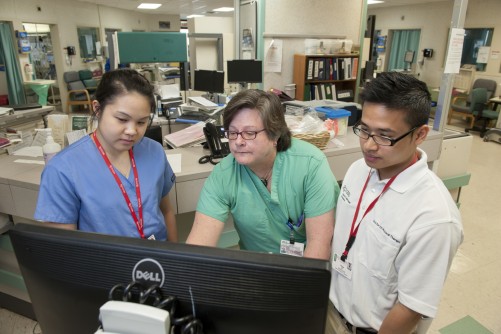 Newswise — Last year, 62-year-old Mark Halliday, a student in the Master of Social Work program at Rutgers University, was hospitalized with a diabetes-related leg infection. Within 24 hours Halliday’s heart rhythm became irregular, he developed sepsis – an infection that spread throughout his body – and he wound up in intensive care, where he was intubated to help him breathe and sedated to make it all more tolerable.

Halliday’s illness, and the urgent treatment he needed, combined to make the experience so stressful that his mental functions declined and he became delirious.

“By the end of the day,” his wife Beth recalls, “he was completely manic and out of control. He began to think he was being held captive and begged for scissors and knives to try to escape." Beth says Mark ripped out his tubes, forcing hospital staffers to physically restrain him and give him antipsychotic medication.

Researchers estimate that at least 45 percent of patients in intensive care develop hospital-acquired delirium, a number that can rise above 80 percent when patients have mechanical breathing assistance as Mark Halliday did. Advancing age also puts patients at higher risk. Patients with delirium tend to die more frequently than others during the 12 months after they leave the hospital, and the effects of delirium often linger. Beth Halliday says her husband still has significant short-term memory loss, and though he returned to work in three months he has not resumed his coursework.

Physicians on the faculty of Rutgers New Jersey Medical School are now studying delirium among patients in the surgical intensive care unit at University Hospital in Newark, the school’s primary teaching facility. They are trying protocols aimed at both preventing delirium and reducing the length of time that delirium lingers – because studies have shown that for every day that a patient remains delirious, the risk of lasting damage rises.

The techniques being used include trying to regularize patients’ sleep-wake cycles. That is hard to do in a hospital – especially in intensive care where certain patients’ conditions demand frequent physical examinations – but the goal is at least two 90-minute periods each day where the patient is undisturbed. Some care that once was given around the clock, such as nurses awakening patients to bathe them, is now reserved for daytime. Patients also receive less sedation where clinicians feel it is possible.

Caregivers are re-evaluating physical restraints, which are applied to help protect patients from hurting themselves. “Paradoxically, the restraints cause agitation or delirium,” says Peter Yonclas, an assistant professor of physical medicine and rehabilitation at the school and one of the study leaders. “What we used to think controlled someone who was agitated probably makes it worse.”

After major surgery, patients often lie in bed all day and don’t move, so suggested protocols for treating delirium also include making the patient as physically mobile as possible. As part of the study, students in the Doctor of Physical Therapy program at Rutgers School of Health Related Professions visit the unit one morning each week – a practice incorporated into their course work.

Supervised by physical therapy faculty, the students put the patients through a series of steps designed to make them more alert, and then encourage them to move their limbs in bed, and eventually – if they can – to sit at the bed’s edge and even get up and walk. They also teach family members how to keep patients more active between physical therapy sessions.

According to the data collected so far, the focus on treating delirium is having a positive effect. “Patients in the unit who developed delirium were delirious for a shorter amount of time,” says Anne Mosenthal, chair of New Jersey Medical School’s Department of Surgery. “We don’t know whether that’s because of the physical therapy, the sleep-wake cycle or our using less sedation, but all of that together seems to have made a difference.”

While patients are benefitting, Rutgers physical therapy instructors say the experience also has been very valuable for their students. “The educational benefits are absolutely phenomenal,” says Mary Jane Myslinski, who teaches students who work in the unit.

Treating these very sick patients has even pointed some students toward a new career path. “When they come here, students don’t even think to enter the field of acute care physical therapy, which is a growing field,” says Susan Paparella-Pitzel, another faculty mentor. “They are more likely to assume they’ll have careers in better known areas such as sports rehab.” But now, Myslinski adds, “we have all these converts who want to do acute care.”

The program is funded by the Healthcare Foundation of New Jersey, whose executive director Marsha Atkind says she is pleased with what she has seen. “They have a strong program and are doing very strong research,” says Atkind. “I think they are really changing the culture of care for older adults.”