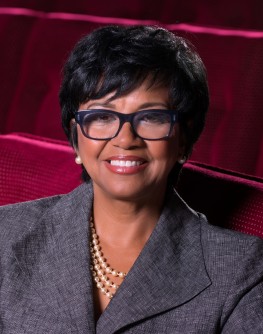 Newswise — (WINSTON-SALEM) Cheryl Boone Isaacs, president of the Academy of Motion Picture Arts and Sciences (AMPAS), will be the speaker for college commencement at the University of North Carolina School of the Arts (UNCSA). The ceremony is at 10 a.m. on Saturday, May 9, in the Stevens Center, 405 W. Fourth St., downtown Winston-Salem.

Boone Isaacs is a film industry public relations executive who has managed publicity efforts for blockbusters including THE CALL, THE ARTIST, THE KING’S SPEECH, PRECIOUS: BASED ON THE NOVEL “PUSH” BY SAPPHIRE, SPIDER-MAN 2, TUPAC: RESURRECTION, AUSTIN POWERS: THE SPY WHO SHAGGED ME, FORREST GUMP and BRAVEHEART.

She has been filmmaker-in-residence, adjunct faculty, and guest lecturer at film schools including Chapman University’s Dodge College of Film and Media Arts, Columbia College Chicago, University of Southern California and the University of California Los Angeles.

“We’re thrilled to have one of the entertainment industry’s most admired and accomplished executives address our campus community,” said Chancellor Lindsay Bierman. “Boone Isaacs’ inspiring leadership, entrepreneurship, and 30 years of experience in one of the world’s most competitive businesses will provide great insights for graduates in every discipline."

Boone Isaacs is serving her second term as president of the Academy. The Academy of Motion Picture Arts and Sciences is the world’s preeminent movie-related organization, with a membership of more than 7,000 of the most accomplished men and women working in cinema. In addition to the annual Oscars — in which the members vote to select the nominees and winners — the Academy presents a diverse year-round slate of public programs, exhibitions and events and a wide array of education, outreach, preservation and research activities.

On May 16, about 121 high school students will receive diplomas during a 10 a.m. ceremony at the Stevens Center. Alumnus David LaChapelle, a world-renowned photographer, documentary filmmaker, and director, will speak at that event. Cheryl Boone Isaacs

Cheryl Boone Isaacs was re-elected for a second term as president of the Academy of Motion Picture Arts and Sciences on Aug. 5, 2014, by the organization’s Board of Governors. She is beginning her 22nd year as a governor representing the Public Relations Branch. She produced the Academy’s 2012 4th Annual Governors Awards. Recognized by her peers in publicity, Boone Isaacs was honored with the coveted 2015 President’s Award at the 52nd annual ICG Publicists Awards. In 2014, Cheryl Boone Isaacs was honored by the Dallas Film Society with its Dallas Star Award. She is a proud 2014 inductee into the NAACP Hall of Fame; the 2014 recipient of the AAFCA (African American Film Critics Association) Horizon Award; and, she received the 2014 Trailblazer Award from Essence Magazine. She was a 2014 filmmaker-in-residence at Chapman University’s Dodge College of Film and Media Arts. From 2002 to 2005, she was an adjunct professor at the USC Cinema and Television School’s Peter Stark Producing Program teaching Motion Picture Marketing and continues to guest lecture at the University of Southern California, University of California Los Angeles, Loyola Marymount, Columbia College Chicago and Mt. Saint Mary’s College. Boone Isaacs currently serves as a trustee for the American Film Institute.

Boone Isaacs heads CBI Enterprises, Inc., where she has consulted on marketing efforts on such films as THE CALL, THE ARTIST, THE KING’S SPEECH, PRECIOUS: BASED on the NOVEL “PUSH” BY SAPHIRE, SPIDER-MAN 2 and TUPAC: RESURRECTION.

Boone Isaacs previously served as president of theatrical marketing for New Line Cinema, where she oversaw numerous box office successes, including AUSTIN POWERS: THE SPY WHO SHAGGED ME and RUSH HOUR. Prior to joining New Line in 1997, she was executive vice president of worldwide publicity for Paramount Pictures, where she orchestrated publicity campaigns for the Best Picture winners FORREST GUMP and BRAVEHEART.

Celebrating its 50th anniversary, the University of North Carolina School of the Arts is America’s first state-supported arts school, a unique stand-alone public university of arts conservatories. With a high school component, UNCSA is a degree-granting institution that trains young people of talent in music, dance, drama, filmmaking, and design and production. Established by the N.C. General Assembly in 1963, the School of the Arts opened in Winston-Salem (“The City of Arts and Innovation”) in 1965 and became part of the University of North Carolina system when it was formed in 1972. For more information, visit www.uncsa.edu.