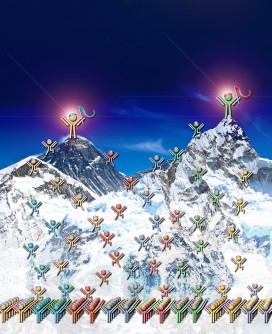 The new drug-discovery technique is a fast, economical, multi-round selection process that enables scientists to identify a small number of functional antibodies from a large library. In the new paper, only two antibodies out of approximately 108 were found to prevent cell death.

Newswise — LA JOLLA, CA—January 16, 2014—Scientists at The Scripps Research Institute (TSRI) have demonstrated the power of a new drug discovery technique, which allows them to find—relatively quickly and cheaply—antibodies that have a desired effect on cells. The TSRI scientists used the technique to discover two antibodies that protect human cells from a cold virus.

The finding includes the useful insight that the cold virus can be stopped by targeting a key viral enzyme in just the right way. More importantly, the study highlights the broad potential of this discovery method to find new ways to fight infections, cancers and other diseases, and perhaps even aging.

“This method allows you to find antibodies that prevent cell death—in this case virus-induced cell death, but potentially any kind of cell death,” said Richard A. Lerner, Lita Annenberg Hazen Professor of Immunochemistry and Institute Professor at TSRI. Lerner was the senior author of the study, which is reported online ahead of print on January 16, 2014 by the Cell Press journal Chemistry & Biology.

For the past two decades, Lerner and his TSRI laboratory have helped pioneer techniques for discovering antibodies that can be used as therapies or scientific tools. Humira®, now among the world’s top-selling pharmaceuticals, is one of many products that have been discovered using such techniques.

Recently, the Lerner laboratory developed an advanced technique in which hundreds of millions of distinct antibodies are produced artificially within very large cultures of mammalian cells. Scientists can use such a system to swiftly find any antibodies that cause a desired outcome (“phenotype”) in the cells where they reside.

Scientists for decades have applied similar “phenotypic selection” methods to libraries of standard small-molecule compounds. But the antibody libraries that can be used with the new method are orders of magnitude larger, making them much more likely to contain members that can achieve a desired result in cells.

“Small-molecule libraries generally contain only tens to hundreds of thousands of compounds, whereas with this method we can use libraries with more than a billion distinct antibodies,” said Jia Xie, a staff scientist in the Lerner laboratory who was first author of the new study.

The new method gives scientists more power not only to find new antibody-based therapies, but also to discover the biological pathways through which they work—pathways that may turn out to be more easily and cheaply targeted by small-molecule drugs.

Earlier this year, Lerner, Xie and their colleagues reported using the new method to find an antibody that can perform the remarkable trick of turning bone marrow cells into young brain cells, via a previously unknown signaling mechanism.

For the new study, the team set out to do a proof-of-principle selection of antibodies that can bring about a different effect: protecting cells against an otherwise certain death. In this case, the agent of death was a rhinovirus, a respiratory virus that is the most common cause of ordinary colds. This rhinovirus reliably kills HeLa cells, a line of human-derived cells that have long been used in studies of viral infection.

Evolving a Discovery, Round by Round

To begin, the team used harmless lentiviruses to distribute the genes for about 100 million distinct antibodies among a similar number of HeLa cells, and later exposed the cells to the rhinovirus. So lethal was this virus to the HeLa cells that nearly every cell soon died, overwhelmed by the infection despite any protective effect from antibodies they harbored.

To detect a protective effect, Xie and his colleagues knew that he would have to make the selection process less drastic. Thus, for the next test, instead of selecting cells that survived—for none would have survived—they selected cells that showed delayed signs of impending death. The researchers then harvested the antibody genes these cells contained, and distributed them among a fresh set of cells. In this way, they reasoned, the genes for the antibodies that had exerted a protective effect would become more abundant within the cells.

Xie and his colleagues took the cells through three of these selection rounds—each requiring about ten days of working and waiting—but saw dismayingly few signs of progress. “The cells that had been infected with our antibody library still showed marginal to undetectable differences from the control cells,” he said.

Then in the fourth round, the protective antibodies became abundant enough to bring about a dramatic change: almost all the antibody-containing cells survived, whereas all the control cells died.

The protection turned out to come from just two antibodies out of the original pool of roughly 100 million. The team determined that both these antibodies protected the cells by attaching to the 3C protease, a rhinovirus enzyme, in ways that hindered its infection-enabling activity.

In principle, if further tests bear out the protective effects of the two antibodies, then optimized versions of them, or small-molecule drugs that hit the same target, could be developed as treatments for rhinovirus infections.

But Xie noted that the study was mainly about demonstrating the usefulness of this broad new method. “It’s a fast, economical, multi-round selection scheme that enables scientists to identify functional antibodies from an unusually big library,” he said. “As long as we have a way to detect and select a desired phenotype in the test cells, this method lets us fish out the antibodies that can make the phenotype happen.”

The study also shows the power of the new method to illuminate biological pathways that mediate disease—in this case the activity of the rhinovirus 3C protease. Moreover, it offers unprecedented insight into the selection process itself.

“We were able to see at each round what antibodies were being selected and how abundant they were in cells,” Lerner said. “It was like following evolution in a test tube.”

Lerner emphasized that this was the first demonstration of screening for the prevention-of-cell-death phenotype using very large antibody libraries—but it won’t be the last. “People now can use this technique to find antibodies that prevent cell death in a wide variety of situations,” he said. Other co-authors of the study, “Prevention of Cell Death by Antibodies Selected from Intracellular Combinatorial Libraries,” were Kyungmoo Yea of the Shanghai Institute for Advanced Immunochemical Studies and Hongkai Zhang, Brian Moldt, Linling He and Jiang Zhu of TSRI.

The study was supported by Zebra Biologics, Inc.