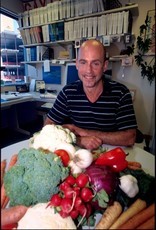 Alan Kristal, Dr.P.H., is associate head of the Cancer Prevention Program at Fred Hutchinson Cancer Research Center in Seattle. (A high-resolution version of this photo is available upon request.)

Newswise — The risk of the two major prostate diseases, cancer and benign prostatic hyperplasia (BPH), can be reduced by changes in lifestyle, such as avoiding smoking, maintaining a normal weight and eating a healthy diet. Alan Kristal, Dr.P.H., associate head of the Cancer Prevention Program at Fred Hutchinson Cancer Research Center in Seattle, has conducted many studies that suggest men need not feel helpless against prostate cancer or BPH.

For example, Kristal and colleagues have found that:

"¢ Eating cruciferous vegetables, especially broccoli, at least three times a week may reduce a man's risk of prostate cancer by nearly half. Scientists believe that these vegetables protect against cancer because they contain isothiocianates, which increase the activity of enzymes that can both detoxify cancer-promoting compounds and decrease the concentration of active androgens (steroid hormones) in the prostate.

"¢ Men who eat a diet low in fat and red meat, moderate in alcohol, and high in vegetables and lean protein have a significantly lower risk of developing symptomatic benign prostatic hyperplasia, or BPH, a condition associated with frequent and painful urination that affects nearly all men by age 70. Kristal and colleague found that a high-fat diet increased the risk of BPH by 31 percent, and that daily consumption of red meat increased the risk by 38 percent. The researchers also found that eating four or more servings of vegetables daily was associated with a 32 percent reduction in risk, consuming high amounts of lean protein was associated with a 15 percent risk reduction, and that regular, moderate alcohol consumption (no more than two drinks a day) was associated with a 38 percent decline in BPH risk.

"¢ Obesity is associated with an 80 percent increase in the risk of high-grade, aggressive prostate cancer. What's more, in men who are at high risk of prostate cancer because of prostate cancer occurring in a first-degree relative, the distribution of body fat may also contribute to increased prostate-cancer risk. "Apple-shaped" men, who store fat in the abdominal area, have a nearly two-fold increased risk of both low- and high-grade prostate cancer. The mechanisms behind the link between obesity and the most aggressive, fatal form of prostate cancer are believed to involve both steroid hormones and systemic inflammation. "Obesity is a massive inflammatory condition," Kristal said. "It also increases levels of circulating estrogens and growth factors that promote cell growth."

"¢ A high-calcium diet, calcium supplements and antacids may increase the risk of advanced prostate cancer. In men who consume more than 1,200 mg per day (equivalent to four or more glasses of milk), the risk of aggressive cancer increases by more than 100 percent. High intake of calcium suppresses blood levels of the active form of vitamin D, a hormone that may protect against prostate cancer.

"¢ Obese men who are diagnosed with prostate cancer have more than two-and-a-half times the risk of dying from the disease as compared to men of normal weight at the time of diagnosis. "If a man is obese at the time of diagnosis, he faces a 2.6-times greater risk of dying as compared to a normal-weight man with the same diagnostic profile, regardless of whether he has a radical prostatectomy or radiation therapy, whether or not he gets androgen-deprivation therapy, whether he has low- or high-grade disease or whether he has localized, regional or distant disease," Kristal said.

"¢ Heavy smokers who are diagnosed with prostate cancer have twice the risk of dying from their disease. Smoking may promote prostate cancer growth through several mechanisms. One is that it can increase the amount of circulating androgens, which fuels the growth of malignant prostate cells. Another theory is related to tobacco as a source of cadmium, a heavy metal that has been linked to prostate cancer in several occupational-health studies. This known human carcinogen inhibits DNA repair, which allows cancer cells to mutate and multiply.

The take-away message from all of these studies is that men can lower their risk of prostate disease by making lifestyle changes. Achieving and maintaining a healthy weight, eating a diet low in fat and high in a variety of vegetables (especially broccoli), and achieving and maintaining a normal body weight can lower the risk of developing BPH and prostate cancer. And if a man is diagnosed with prostate cancer, quitting smoking and losing weight may lower the risk of developing an aggressive, lethal form of the disease.