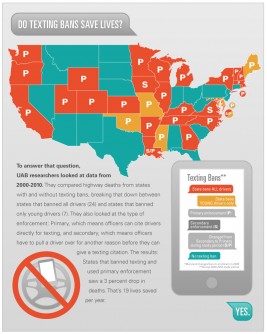 Data from UAB study of the impact texting-while-driving laws have had on roadway crash-related fatalities.

Newswise — BIRMINGHAM, Ala. –Researchers at the University of Alabama at Birmingham School of Public Health examined the impact texting-while-driving laws have had on roadway crash-related fatalities, and the findings are published in the August issue of the American Journal of Public Health.

Of drivers in the United States ages 18-64 years, 31 percent reported they had read or sent text or email messages while driving at least once in the 30 days prior, according to 2011 data from the Centers for Disease Control and Prevention. That same year, 3,331 people were killed in crashes involving a distracted driver, and an additional 387,000 people were injured.

While completing her doctoral work in the Department of Health Care Organization and Policy, Alva O. Ferdinand, Dr.P.H., J.D., conducted a longitudinal panel study to examine within-state changes in roadway fatalities after the enactment of state texting-while-driving bans using roadway fatality data captured in the Fatality Analysis Reporting System between 2000 and 2010.

“Very little is known about whether laws banning texting while driving have actually improved roadway safety,” Ferdinand said. “Further, given the considerable variation in the types of laws that states have passed and whom they ban from what, it was necessary to determine which types of laws are most beneficial in improving roadway safety.”

Some states have banned all drivers from texting while driving, while others have banned only young drivers from this activity, Ferdinand says. Additionally, some states’ texting bans entail secondary enforcement, meaning an officer must have another reason to stop a vehicle, like speeding or running a red light, before citing a driver for texting while driving. Other states’ texting bans entail primary enforcement, meaning an officer does not have to have another reason for stopping a vehicle.

“Our results indicated that primary texting bans were significantly associated with a 3 percent reduction in traffic fatalities among all age groups, which equates to an average of 19 deaths prevented per year in states with such bans,” Ferdinand said. “Primarily enforced texting laws that banned only young drivers from texting were the most effective at reducing deaths among the 15- to 21-year-old cohort, with an associated 11 percent reduction in traffic fatalities among this age group in states with such bans.”

States with secondarily enforced restrictions did not see any significant reductions in traffic fatalities.

“We were a little surprised to see that primarily enforced texting bans were not associated with significant reductions in fatalities among those ages 21 to 64, who are not considered to be young drivers,” Ferdinand said. “However, states with bans prohibiting the use of cellphones without hands-free technology altogether on all drivers saw significant reductions in fatalities among this particular age group. Thus, although texting-while-driving bans were most effective for reducing traffic-related fatalities among young individuals, handheld bans appear to be most effective for adults.”

Ferdinand’s mentor, Nir Menachemi, Ph.D., professor in the Department of Health Care Organization and Policy, says it is a key responsibility of health policy researchers to generate high-quality evidence on the health impact of societal policies and laws.

“Clearly, distracted driving is a growing problem affecting everyone on the roadways,” Menachemi said. “It is my hope that policymakers act upon our findings so that motor-vehicle deaths can be prevented.”