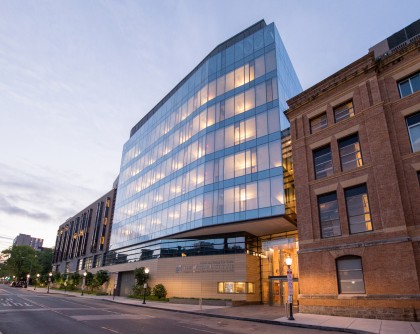 Newswise — PHILADELPHIA—(Sept. 28, 2016)—Principal investigators at The Wistar Institute, an international biomedical research leader in cancer, immunology and infectious diseases, have secured nearly $14 million in research funds. And since the start of 2016, Wistar researchers have received more than $20 million in funding. This round of awards includes a National Cancer Institute (NCI) grant totaling more than $6,158,000 over five years that supports three collaborative research projects aimed at understanding prostate cancer progression and developing new treatments for the disease. Dario C. Altieri, M.D., Wistar president and CEO and director of the Institute’s Cancer Center, was awarded this NCI program grant, and will lead the first project, which focuses on understanding new pathways involving energy produced by mitochondria—the powerhouse of cells—and its function in prostate cancer invasion.

The second project funded by this grant will be led by Lucia Languino, Ph.D., director of the Jefferson Graduate School of Biomedical Sciences Ph.D. Program in Genetics, Genomics and Cancer Biology, professor of Cancer Biology, and member of the Sidney Kimmel Cancer Center. It will elucidate the function of prostate cancer-released exosomes (small vesicles secreted by most cells that play a role in cell-to-cell communication) as novel mediators for integrin-dependent tumor cell motility.

The third prostate cancer project is a new addition to the study and will be led by Dmitry Gabrilovich, M.D., Ph.D., professor and program leader of Wistar’s Translational Tumor Immunology Program, who will study mitochondrial reprogramming in the function and homing of myeloid-derived suppressor cells to primary and pre-metastatic tumor sites during prostate cancer progression.

In addition, the following Wistar scientists have recently received grants and/or prizes:

• The laboratory of Emmanuel Skordalakes Ph.D., associate professor in the Gene Expression and Regulation Program, focuses on the role of telomeres and telomerase in cancer. Telomeres are stability structures responsible for maintaining the ends of our chromosomes while telomerase is the enzyme that maintains telomeres and is frequently reactivated by cancer cells to trigger unregulated cell division. Skordalakes was awarded a NCI grant totaling $2,379,740 over five years to study the role of telomerase reactivation in melanoma. His research utilizes crystal structures and biochemical and cell-based assays to pinpoint the architecture of telomerase and identify small molecules that inhibit the enzyme. This grant will fund research into how telomerase could be targeted therapeutically as a treatment for melanoma, the deadliest form of skin cancer. Currently, there are no clinically available drugs that target telomerase. Though the continuation of this work may lead to small molecule inhibitors of telomerase and future melanoma cancer therapies.

• Ovarian cancer is the deadliest gynecological cancer, and when the disease is diagnosed at later stages and has metastasized, it is the fifth leading cause of cancer death in women. Through cancer immunology research focused on immunogenic ovarian tumors and the role of endogenous retroviruses (remnants of inherited virus fragments in the body) that reactivate and alter the immune environment, José R. Conejo-Garcia, M.D., Ph.D., professor and co-program leader in Wistar’s Tumor Microenvironment and Metastasis Program, was awarded a National Institutes of Health (NIH) grant totaling $2,256,250 over five years. His research illuminates the dynamics of antitumor immunity and how ovarian cancer suppresses the immune system, and could lead to new targeted therapies that allow the body to recognize ovarian tumors that initially evaded the immune system.

• Advancing research into multiple myeloma, an incurable blood cancer, Yulia Nefedova, M.D., Ph.D., assistant professor in Wistar’s Tumor Microenvironment and Metastasis Program, was awarded a NCI grant totaling $2,162,365 over five years to study how neutrophils—a type of white blood cell—are appropriated to help tumor growth and resistance to chemotherapy. Nefedova’s project will determine the mechanisms responsible for turning neutrophils into ones that support tumor progression with the hope of improving chemotherapy treatments for patients with multiple myeloma.

• Determining how the immune system can prevent autoimmune responses to its own tissues and regulate its responses to invading microrganisms, Andrew Caton, Ph.D., professor in Wistar’s Translational Tumor Immunology Program, received a National Institute of Allergy and Infectious Diseases grant for $586,712 over one year as part of the project “Regulatory T cell diversity in recognition of influenza virus HA.”

• Investigating the role of DNA regulatory elements called “enhancers” during the onset of Acute Myeloid Leukemia, Alessandro Gardini, Ph.D., assistant professor in Wistar’s Gene Expression and Regulation Program, was awarded a Leukemia Research Foundation “New Investigator” grant totaling $100,000 over one year. The grant will support research into understanding how normal blood cells become dysfunctional and then leukemic, and how that will inform the development of preventative and curative therapies that would target the disease at an early, preleukemic stage.

• Rugang Zhang, Ph.D., professor and co-program leader in Wistar’s Gene Expression and Regulation Program, was awarded a prize for $5,000 from the Ovarian Cancer Research Fund Alliance (OCRFA). The Liz Tilberis Research Prize for Outstanding Early Career Investigators honors the OCRFA’s late president Liz Tilberis and was awarded to Zhang for his strong commitment and breakthrough research in ovarian cancer.

###The Wistar Institute is an international leader in biomedical research with special expertise in cancer research and vaccine development. Founded in 1892 as the first independent nonprofit biomedical research institute in the United States, Wistar has held the prestigious Cancer Center designation from the National Cancer Institute since 1972. The Institute works actively to ensure that research advances move from the laboratory to the clinic as quickly as possible. www.wistar.org.