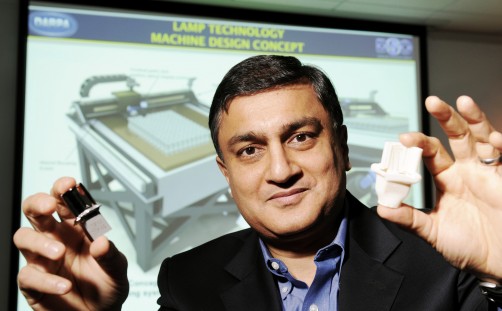 Suman Das, a professor in Georgia Tech’s School of Mechanical Engineering, displays a ceramic mold produced directly from digital designs using large area maskless photopolymerization (LAMP) technology. In his right hand, he holds a single-crystal superalloy turbine airfoil that was cast using a ceramic mold of the kind he holds in his left hand. 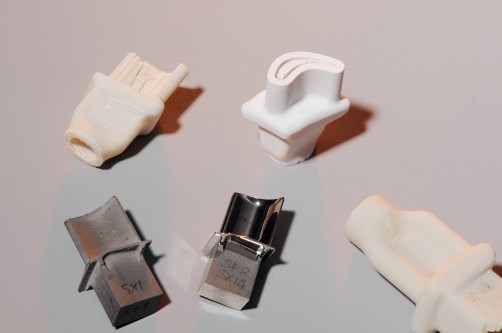 Image shows a collection of molds made through the large area maskless photopolymerization (LAMP) technology and airfoil components produced using them.

Suman Das, a professor in the George W. Woodruff School of Mechanical Engineering, has developed an all-digital approach that allows a part to be made directly from its computer-aided design (CAD). The project, sponsored by the Defense Advanced Research Projects Agency (DARPA), has received $4.65 million in funding.

“We have developed a proof-of-concept system which is already turning out complex metal parts, and which fundamentally transforms the way that very high-value castings are made,” said Das, who directs the Direct Digital Manufacturing Laboratory in Georgia Tech’s Manufacturing Research Center (MaRC). “We're confident that our approach can lower costs by at least 25 percent and reduce the number of unusable waste parts by more than 90 percent, while eliminating 100 percent of the tooling.”

The approach being utilized by Das and his team focuses on a technique called investment casting, also known as lost-wax casting. In this process, which dates back thousands of years, molten metal is poured into an expendable ceramic mold to form a part.

The mold is made by creating a wax replica of the part to be cast, surrounding or "investing" the replica with a ceramic slurry, and then drying the slurry and hardening it to form the mold. The wax is then melted out – or lost – to form a mold cavity into which metal can be poured and solidified to produce the casting.

Investment casting is used to create precision parts across diverse industries including aerospace, energy, biomedical and electronics. Das’s current efforts are focused on parts used in aircraft engines. He is working with turbine-engine airfoils – complex parts used in jet engines – in collaboration with the University of Michigan and PCC Airfoils.

Today, Das explained, most precision metal castings are designed on computers, using computer-aided design software. But the next step – creating the ceramic mold with which the part is cast – currently involves a sequence of six major operations requiring expensive precision-machined dies and hundreds of tooling pieces.

"The result is a costly process that typically produces many defective molds and waste parts before a useable prototype is achieved," Das said. "This trial-and-error development phase often requires many months to cast a part that is accurate enough to enter the next stage, which involves testing and evaluation."

By contrast, Das’s approach involves a device that builds ceramic molds directly from a CAD design, completing the task much faster and producing far fewer unusable parts. Called Large Area Maskless Photopolymerization (LAMP), this high-resolution digital process accretes the mold layer by layer by projecting bitmaps of ultraviolet light onto a mixture of photosensitive resin and ceramic particles, and then selectively curing the mixture to a solid.

The technique places one 100-micron layer on top of another until the structure is complete. After the mold is formed, the cured resin is removed through binder burnout and the remaining ceramic is sintered in a furnace. The result is a fully ceramic structure into which molten metal – such as nickel-based superalloys or titanium-based alloys – are poured, producing a highly accurate casting.

“The LAMP process lowers the time required to turn a CAD design into a test-worthy part from a year to about a week,” Das said. “We eliminate the scrap and the tooling, and each digitally manufactured mold is identical to the others.”

A prototype LAMP alpha machine is currently building six typical turbine-engine airfoil molds in six hours. Das predicts that a larger beta machine – currently being built at Georgia Tech and scheduled for installation at a PCC Airfoils facility in Ohio in 2012 – will produce 100 molds at a time in about 24 hours.

Although the current work focuses on turbine-engine airfoils, Das believes the LAMP technique will be effective in the production of many types of intricate metal parts. He envisions a scenario in which companies could send out part designs to digital foundries and receive test castings within a short time, much as integrated-circuit designers send CAD plans to chip foundries today.

“This process can produce parts of a complexity that designers could only dream of before,” he said. “The digital technique takes advantage of high-resolution optics and precision motion systems to achieve extremely sharp, small features – on the order of 100 microns.”

Das also noted that the new process not only creates testable prototypes but could also be used in the actual manufacturing process. That would allow more rapid production of complex metal parts, in both low and high volumes, at lower costs in a variety of industries.

“When you can produce desired volumes in a short period without tooling,” he said, “you have gone beyond rapid prototyping to true rapid manufacturing.”

The project depicted in this article is sponsored by the Defense Advanced Research Projects Agency; the content of this article does not necessarily reflect the position or the policy of the government, and no official endorsement should be inferred.