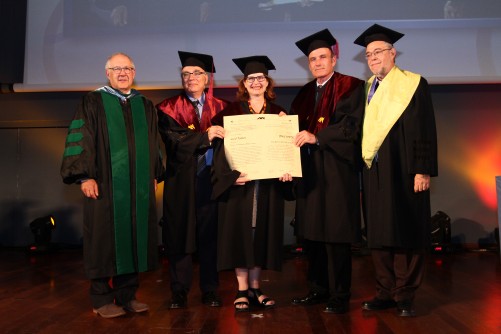 Newswise — Language and human communication researcher, Prof. Carol Padden of UC San Diego, was honored with a Degree of Doctor of Philosophy, Honoris Causa, from the University of Haifa at a festive event on Tuesday, as part of the University’s 43rd Meeting of the Board of Governors. The honor was bestowed upon Padden in recognition of her pioneering and ongoing contribution to the study of sign language, to understanding the culture of deaf people, and to the study of the nature and development of human language, and on her fruitful academic collaboration with researchers of the Sign Language Research Laboratory and of the Faculty of Education at the University of Haifa.

Padden, who alongside linguistic research, was one of the first people to study deaf society as a cultural group, has two joint research projects with a number of University of Haifa researchers. The first studies the ways in which hand gestures integrate with body gestures and facial expressions to create grammatical structure and is conducted with Prof. Wendy Sandler and Prof. Irit Meir. The second, an international research project about reading among deaf people in different written languages conducted with Prof. Paul Miller.

President of the University of Haifa, Mr. Amos Shapira, noted Prof. Padden's ability to excel regardless the obstacles. "Prof. Padden inspires us through her achievements as a person and as a deaf woman – achievements that are praiseworthy for recognizing that departures from the usual are not handicaps. For this we believe she is worthy of the highest honor that the University awards – the Degree of Doctor of Philosophy, Honoris Causa,” says Shapira.

Along with Prof. Padden, seven other people received six honorary degrees: Prof. Robert (Uri) Alter, in recognition of his achievements in the study of comparative literature in general, and translating the Hebrew Bible into English; Felix Posen, in recognition of his great contribution to strengthening Jewish culture and on his contribution to the fight against anti-Semitism; Orna Porat, In recognition of her great contribution to the shaping of Israeli culture and her contribution to educating youth to imagination, vision, tolerance and creativity; Noah Klieger, In recognition of his investment and effort to instill memory of the Holocaust, especially among the younger generation and leaders in Israel and abroad and his professional achievements in the field of journalism in general and sports journalism in particular; Shira and Jay Ruderman, of visionary leadership for making those who are different and outsiders become accepted and mainstream and on uncompromising investment in strengthening relations between American Jews and Israel.