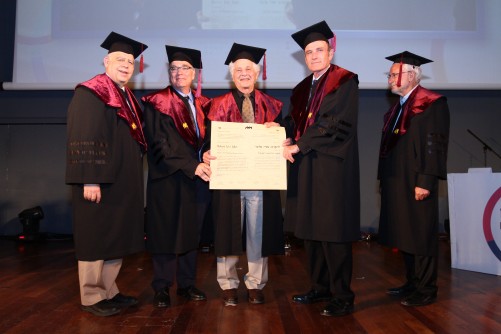 Newswise — Prof. Robert (Uri) Alter of UC Berkeley was honored with a Degree of Doctor of Philosophy, Honoris Causa, from the University of Haifa at a festive event on Tuesday, held as part of the University’s 43rd Meeting of the Board of Governors. The honor was bestowed upon Alter in recognition of his outstanding achievement in the study of comparative literature in general and of translating the Hebrew Bible into English, enabling billions of people around the world access to texts that constitute the cultural heritage of the people of Israel.

The comparative literature researcher, who is nearing the end of his ambitious endeavor of the past 20 years - the translation of the Tanakh into English, including its commentary and research comments, thanked the University of Haifa's president, rector and senate for the honor. "It's particularly meaningful for me to accept this honor because much of my professional work is in Scripture and modern Hebrew literature, subjects that you deal with here at the University of Haifa, so it means a lot that you've given me this honor", said Alter in his acceptance speech.Along with Prof. Alter, seven other people received six honorary degrees: Prof. Carol Padden, in recognition of her pioneering and ongoing contribution to the study of sign language, to understanding the culture of deaf people, and to the study of the nature and development of human language and for inspiring us through her achievements as a person and as a deaf woman – achievements that are praiseworthy for recognizing that departures from the usual are not handicaps.; Felix Posen, in recognition of his great contribution to strengthening Jewish culture and on his contribution to the fight against anti-Semitism; Orna Porat, In recognition of her great contribution to the shaping of Israeli culture and her contribution to educating youth to imagination, vision, tolerance and creativity.; Noah Klieger, In recognition of his investment and effort to instill memory of the Holocaust, especially among the younger generation and leaders in Israel and abroad and his professional achievements in the field of journalism in general and sports journalism in particular.; Shira and Jay Ruderman, of visionary leadership for making those who are different and outsiders become accepted and mainstream and on uncompromising investment in strengthening relations between American Jews and Israel.