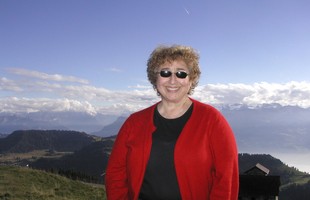 City Tech Professor Adrianne Wortzel in Zurich completing a six-month residency with the Artificial Intelligence Lab at the University of Zurich.

Newswise — You can do your banking, order merchandise from shops and take care of a host of other things online these days. But using the Internet to "see" a shrink? Thanks to New York City College of Technology's (City Tech) Professor Adrianne Wortzel, that's now possible, too, albeit in a tongue-in-cheek way.

Wortzel, who teaches new media in City Tech's Department of Advertising Design & Graphic Arts, has created a virtual robot psychoanalyst on her interactive website, "Eliza Redux." If you log on at http://elizaredux.org and sign up for a session, you can visit with the robot shrink-in-residence, ask it questions and get oral responses, although some responses will make it clear that it is the robot that likely needs the counseling more than you do.

In visiting the site, you will be joining people from all over the world who have queued up in cyberspace to participate in this project, which is actually an art installation; Wortzel is a National Science Foundation (NSF) award-winning artist who combines technology and art in work that has been exhibited in museums (including the Whitney Museum of American Art), galleries and festivals worldwide and on the web.

Counting the minutes before you are called for your five-minute session, you can chat with others in "The Wading Room," where visitors wade in their own pool of problems while waiting for their session. Eliza Redux is supported by a Franklin Furnace Fund for Performance Art Award. Wortzel and her collaborators, Robert Schneider (Professor of Mathematics and Computer Science at Lehman College) and Michael Schneider (Professor of Physical Computing at NYU's Interactive Telecommunications Program) have just been awarded a grant from the Greenwall Foundation to further develop the project.

Initially, this will entail stocking reading materials in the wading room, including archived sessions where permission has been granted, snippets of scripts from psychoanalytic sessions depicted in movies, and research and responses about psychotherapy other than those related to therapy sessions. Visitors also can add related materials to the file.

"'Eliza Redux' brings to life the inner sanctum of the archetypical psychoanalyst's office," says Wortzel, "and speaks of the mind as a place without walls except for the ones we put up for our own safety, decorum and ideas about constraints and their contribution to progress."

Wortzel, who was the 2002 City Tech Scholar on Campus, also teaches for The City University of New York (CUNY) Graduate Center's Instructional Technology Certificate Program and is an adjunct professor of mechanical engineering at the Cooper Union for the Advancement of Science and Art, where she teaches an interdisciplinary course for engineering, art and architecture students called Design, Illusion and Reality: A Course in Robotics and Theater. At Cooper Union, she and two colleagues received a $50,000 NSF grant, matched by Cooper Union, for a Robotic Renaissance Project titled "StudioBlue." The grant also served as additional support for her 2001 Whitney Museum of American Art-commissioned interactive installation, "Camouflage Town."

"Kiru," the remote-controlled robot "star" of "Camouflage Town," allowed Wortzel's sense of humor to flourish. He was available for manipulation over the web 24 hours a day, so that anyone in the world could participate at any time. In the wee hours of one morning early in "Kiru's" Whitney stay, Wortzel directed the robot from the web at her home computer to trail the museum's maintenance staff, startling them by pointing out spots on the floor in need of their attention that they'd ostensibly missed.

Many City Tech students have been happily employed on Wortzel's public projects, and others soon will have even more opportunities. She is currently awaiting word on grant proposals to create "Eliza Redux" as a physical installation, and proposals are in the wings to create on campus a permanent lab and robotic experimental arena for City Tech student and faculty research and development. The lab would involve all departments of the College's School of Technology & Design in interdisciplinary endeavors.

"Eliza Redux" had its debut in a kiosk display for visitors to the physical exhibition "Brides of Frankenstein" and attracted considerable attention at San Jose Museum of Art in California during the exhibit's run from July through October 2005.

"Eliza Redux" emerges from Dr. Joseph Weizenbaum's computer program ELIZA, developed in the Department of Electrical Engineering at MIT in 1966. Weizenbaum's ELIZA allowed for text-based human conversation with a computer program playing the role of a Rogerian psychotherapist. ELIZA, as the forerunner of natural language processing programs, serves as the "parent" of all chat and chatterbox programs that have followed. Wortzel's "Eliza Redux" remains perpetually a work in progress, so visitors to the site should check back every now and then to learn what's new.

Recently, as the recipient of an international Artists-In-Labs (AIL) Award, Wortzel completed a six-month residency with the Artificial Intelligence Lab (AILAB) at the University of Zurich in Switzerland. The AILAB is an international interdisciplinary artificial intelligence laboratory producing robots that emulate nature. During her residency, Wortzel collaborated with researchers, including robotic engineers, linguists, philosophers and biologists, to produce a new work titled "archipelago.ch."

"My project mission was to develop an artwork in collaboration with robotic researchers in the form of an original dramatic scenario based entirely on their work," Wortzel says. "The thrust of my work is to explore historical and cultural perspectives through new technologies. To this end, I create interactive robotic and telerobotic theatrical scenarios in both physical and virtual networked environments."

Documentation on her AIL project, "Converse Engineering: Stories of Emerging Differentiation and Otherness in Robotic Entities," will be published in May 2006 in print in ArtistsInLabs: Processes of Inquiry/Exploring the Interface Between Art and Science (Springer Verlag Wien, Dr. Jill Scott, editor) accompanied by a DVD of all of the projects. An online documentation of her residency also will be available in May 2006. All documentation of her projects are linked from http://artnetweb.com/wortzel. Brooklyn native Wortzel made what she considers a fortunate mid-career shift from painting and printmaking into artificial intelligence, robots, interactivity, video, telerobotics and other technologies nearly three decades after earning a BA from Brooklyn College and studying with painters Ad Reinhardt and, at Hunter College, Mark Rothko. While earning an MFA in computer arts at the School of Visual Arts in Manhattan from 1993 to 1995, she became fascinated with new media, won the Paula Rhodes Award for Excellence, and entered what she calls her "current playground, the nexus between art and science." She has been creating "performative webcasts" and Internet art since 1994, when her journal spoof, "The Electronic Chronicles," which also was her MFA thesis, was featured at The Berlin Videofest. You can view it at http://artnetweb.com/projects/ahneed/first.html.

Wortzel's grants have included a New York State Council of the Arts Electronic Media and Film Program grant to Lehman College Art Gallery for "Sayonara Diorama," PSC-CUNY Research Grants and Guggenheim Museum support for "Pangaea-Pangaea," PSC-CUNY grants for "Eliza Redux," and a Robert Rauschenberg Foundation Change grant. Since 1999 she has been a member of the College's New Media Task Force and CUNY's Online Faculty Advisory Council for Distance Learning. Why robots? Wortzel was attracted to their possibilities as what she calls "avatars." "Many people project different personalities on the Internet or in online performance," she says, "and robots are great vehicles for embodying whatever characters you want them to be."

Wortzel's work exhibits the humorous irony of the human to man-made-object relationship expressed in performance from the deus ex machina device in ancient Greek plays to Mary Shelley's Frankenstein: "We treat walking, talking, man-made machines as another species," says Wortzel, "and respond to them, at times, with discomfort because a robot reminds us not only of what we can control, but what we cannot control. We imagine it would be difficult, in a confined space like an elevator, to ignore the presence of a robot. Yet, visitors in the elevator at the Whitney Museum tended to look the other way when "Kiru" entered the elevator and said, "Fifth floor, please." It seems that we, as humans, tend to project our own expectations, fantasies and fears on machines that imitate us in any way by moving and speaking."

New York City College of Technology (City Tech) of The City University of New York is a recognized national model for urban technological education and a pioneer in integrating technology into the teaching/learning experience. The largest public college of technology in New York State, City Tech enrolls more than 12,000 students in 57 baccalaureate, associate and specialized certificate programs in the technologies of art and design, business, computer systems, engineering, entertainment, healthcare, hospitality, human services, the law-related professions, career and technology teacher education, and the liberal arts and sciences. Another 14,300 students enroll annually in adult education and workforce development programs, many of which lead to licensure and certification. Located at 300 Jay Street in Downtown Brooklyn, City Tech is at the MetroTech Center academic and commercial complex, convenient to public transportation.