Newswise — Researchers at the Center for Professional Excellence (CPE) at York College of Pennsylvania continue to find that students aren’t making the grade as professionals in the workplace, according to the annual nationwide survey on the state of professionalism among young workers.

In 2009, 37.3 percent of respondents felt that less than half of all new graduates exhibited professionalism in the workplace. This year, that number virtually remains unchanged at 38.2 percent. Nearly a fourth of survey-takers said that professionalism in young workers had decreased, while more than 15 percent of respondents believed it had increased.

“If there is good news from this survey it is that things are not getting worse,” said David Polk whose firm, the Polk-Lepson Research Group, was commissioned to complete the study.

The study, in its second year, also added a new component. Along with surveying more than 400 business leaders and human resources professionals nationwide, the survey also asked about the same number of current college students and recent graduates from around the country the same questions.

“There are some really interesting findings from the students’ responses,” said Polk. “Many of the student responses mirror what business leaders and HR professionals had been telling us.”

The 2010 study did find a few new traits that young workers aren’t displaying on the job. Internet etiquette, the ability to accept personal responsibility, and the ability to accept constructive criticism all were found to be absent from many unseasoned workers. Survey developers determined this by asking which traits are most important for professionals and then having respondents evaluate those traits in new employees.

“It was really surprising to see the importance ratings alongside the prevalence ratings,” said Polk. “New employees are lacking the professional qualities that are deemed to be important. The largest gap exists for accepting personal responsibility and for decisions and actions and being open to criticism.” Interestingly, students also perceive this gap between importance and prevalence when rating the same qualities. However, they tend to feel they demonstrate more professionalism than employers actually experience.”

The CPE survey also reaffirms several findings from last year, such as new employees continue to be concerned with advancement opportunities more so than they probably should be, and information technology (IT) etiquette problems are not getting any better.

“Some of these problems in the workplace are the same things we are seeing in the classroom,” said Polk. “Students and employees alike are text messaging, surfing the Internet, and responding to cell phone calls at inappropriate times. It appears that for many the need to be in constant contact with friends and family has become an addiction. The addicted no longer see it as rude to be obsessively responding to calls or text messages.”

Student recognize the existence of IT problems surrounding social networking sites like Facebook and the micro blogging site Twitter. More than 8 in 10 student respondents who believe IT etiquette problems are on the rise identified text messaging at inappropriate times as an IT problem that exists in the workplace.

While companies of all sizes are reporting IT-related etiquette problems, larger companies – those with 50 or more employees – are more likely to see an increase in these issues.

A “sense of entitlement” continues to be a seen in younger workers. Entitlement, defined as expecting rewards without putting in the work or effort to merit the rewards, was the most cited reason (21.5%) for a decline in professionalism over the past five years. More than half of all respondents, 55.3%, say that young workers feel more entitled than their peers five years ago. Only 6.0% said it remained the same.

Roughly a fifth of those surveyed blamed an increase in entitlement as the need for instant gratification. Other respondents said younger workers had been coddled, expected mid-career treatment as an entry-level employee and had a lack of work ethic.

Researchers wanted to know if the age of the respondents played a role in determining whether or not a sense of entitlement existed. It would be logical to assume that younger respondents would be less likely to say that entitlement among new workers had increased. However, the study found the opposite. The younger the employer respondents, the more likely they were to see an increase in entitlement.

Overwhelmingly (96.3 percent) respondents continue to say that professionalism does factor into the decision to hire or not hire an individual. The “ability to communicate” factored as the top method of evaluating professionalism. HR professionals and business leaders also frequently said that one’s attitude or demeanor played a role in determining professionalism.

In the 2009 survey, the business world held colleges and universities accountable for preparing young workers for the workplace as 97.6 percent of respondents believed that this should be the role of colleges regardless of a student’s major. Given that, respondents this year were asked to give suggestions on how this could be achieved. The top three responses were through internships/hands-on experiences (25.0 percent), classes on etiquette (15.2 percent) and teaching common courtesy and personal responsibility (9.3 percent).

Due to the responses from last year’s survey, York College of Pennsylvania created a series of professional development seminars for students. Respondents said college-hosted seminars continue to be a valuable tool for young workers. In fact, of those business leaders and HR professionals surveyed, roughly only a third (36.5 percent) had in-house programs designed to orient new employees to professional behavior.

Student respondents reported three to one that colleges which offered professionalism programming were a valuable tool. As expected, the older students get, the more they recognize the importance of professionalism.

Respondents cited the most frequent means of hiring new employees is by direct contact with the company (63.5 percent). Employee referrals were almost mentioned as often 62.1 percent. Fewer than four in 10 respondents use job aggregator websites such as Monster, CareerBuilder and HotJobs to hire employees.

The sample size of this survey consisted of 430 people. It has a margin of error at 4.7 percent at the 95 percent confidence level. The sample consisted of nationwide HR professionals and business leaders. The sample size from students and recent graduates was 436. Student responses were geographically diverse. Data was collected via an online survey. The top three industries represented in this year’s survey were service (24.0 percent), manufacturing (19.3 percent) and retail (11.2 percent). Roughly half of all survey-takers held graduate degrees and more than a quarter held positions as President/CEO/CFO. 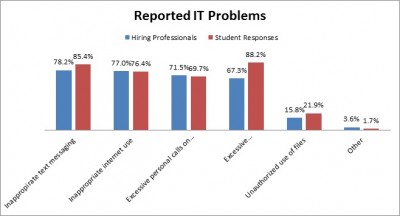 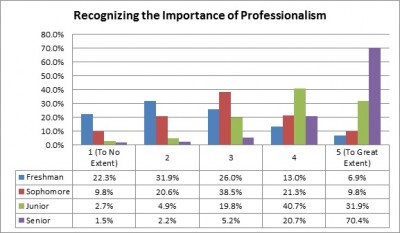