You may have heard that you shouldn't look directly at the sun, but that's exactly what Jason Jackiewicz does for a living. Specifically, the New Mexico State University astronomy professor studies the sun's (and other stars') interior using seismology. 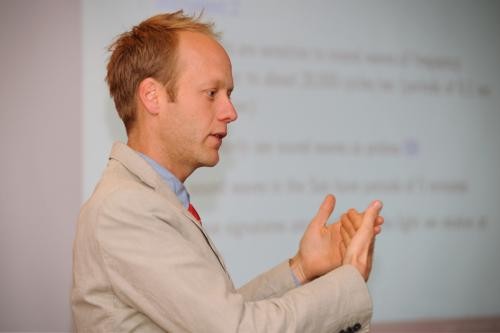 Newswise — You may have heard that you shouldn’t look directly at the sun, but that’s exactly what Jason Jackiewicz does for a living. Specifically, the New Mexico State University astronomy professor studies the sun’s (and other stars’) interior using seismology.

“The same things that we do to study the inside of the earth by using earthquakes and waves, we can do for other stars as well to determine what they would look like inside,” he said.

An assistant professor in the College of Arts and Sciences, Jackiewicz recently received a five-year National Science Foundation CAREER award of $593,000 for his solar astronomical research, with almost $140,000 funding his first year. The funding will also be used to support educational outreach.

He delivered a presentation about his work, “Constraining the Solar Dynamo Using Helioseismology,” at an NMSU Research Rally held Friday, April 4.

“The research for that grant is to study how the sun creates a magnetic field as it rotates, and eventually how we can use that information to forecast the sun’s dynamics in the future, the way we might forecast weather on the earth,” Jackiewicz said. He’s spent the past several years studying magnetic fields of the star at the center of our solar system.

Jackiewicz explained that using techniques based on helioseismology (the study of sound waves inside the sun), he and his fellow researchers will be able to analyze 20-plus years of data and measure flows in the outer 30 percent of the sun.

“Those results of velocities we measure will be ingested into new models of the solar dynamo and understand how that influences what we know from the solar cycle observations,” he said.

“We’ve measured the interior rivers of plasma in the sun. Inside the sun there are motions of the plasma on a very large scale – you could think of them as big circulating cells,” he said. “Those rivers of plasma flow from the equator of the sun to the poles on the surface, and then deeper inside, back to the equator, to form the complete cell structure.

“We’ve tried to determine if those cells of motion are consistent with other measurements of how the sun can generate its magnetic field. We’re trying to put all these pieces of the puzzle together to understand the big picture of how the interior of the sun might be generating its very dominant magnetic field.”

After graduating from Duquesne University in Pittsburgh with a bachelor of science in physics and mathematics, Jackiewicz earned his Ph.D. from Boston College.

Jackiewicz also plans to use the NSF grant to promote outreach efforts within the community. He and his research colleagues are teaming up with Susan Brown, director of the Science, Engineering, Mathematics and Aerospace Academy to educate area sixth grade teachers.

“We’ll enlist experts to teach these teachers new areas of STEM they can take into their classrooms,” he said. “We’ll be teaching them about the sun and current research so they can develop activities for their students. Our goal is to get them excited about science.”

Two doctoral candidates will be working alongside Jackiewicz. Additionally, the project will provide research opportunities for 10 NMSU undergraduates from the New Mexico Alliance for Minority Participation, administered through the College of Engineering.

“We want to engage students that are typically underrepresented in STEM fields, especially astronomy,” he said.

“This project is involving graduate and undergraduate students, undergraduate minority students, and then reaching out to sixth-grade students,” said Greg Fant, associate vice president and deputy provost. “You see the whole package of what we want to do in terms of teaching, research and outreach. It’s what the university is about. It’s so exciting to see it come to fruition and have the National Science Foundation recognize it.”