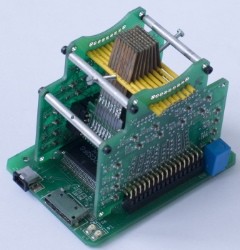 Newswise — Qi Wang, assistant professor of biomedical engineering at Columbia Engineering, recently won the prestigious 2014 Early Career Achievement Award from the IEEE Engineering in Medicine and Biology Society (EMBS). EMBS, the world's largest society of biomedical engineers, cited his “contribution to neural engineering and biomedical instrumentation, including measuring biomechanical properties of skin and tissue, building a tactile display for a virtual Braille system, and discovery of a neural basis for sensory adaptation in behavior.“ Wang was presented with the award at the 36th EMBS annual conference, held in Chicago, IL, August 26-30.

“This is a tremendous honor for me,” says Wang, who is also the director of the Neural Engineering and Control Lab at Columbia Engineering. “It’s very exciting to see my work recognized by such an important organization, which is the world’s largest international society of biomedical engineers.”

Wang’s research focuses on neural engineering, on understanding how the brain extracts information about the outside world through the electrical activity of neurons, cracking the neural code, and examining the nuance of “writing” information into the brain through brain-machine interfaces. In addition, his lab works to develop new technologies that utilize the brain-machine devices to further restore brain functions in clinical applications.

One of his major targets is exploring the neural basis of the sense of touch, specifically geared towards determining how information related to touch is encoded in various brain structures within the somatosensory pathway of the brain. The sense of touch is crucial for humans to explore and manipulate the external world—when you touch an object, forces are imposed on your skin, causing a complicated pattern of skin deformation. This deformation, together with the posture and motion of various muscles of the arm, are conveyed to the brain, forming the perception of the properties of the object, such as shape and stiffness.

To probe sensory processing in the brain, Wang has designed a high-performance, compact tactile stimulator array with which he has already discovered complex interplay between tactile and visual processing.

“This device can also be used as a virtual Braille system,” he notes. “It is like a Kindle for blind people because it enables them to feel and tactilely ‘read’ all the Braille characters, as well as a variety of tactile graphics.” Currently his lab is also using this device, in concert with non-invasive neuroimaging techniques, to probe abnormal perceptual processing in diseased brains such as in Autism Spectrum Disorders (ASD). This could lead to a novel diagnostic tool for ASD.

Wang is also working with colleagues at the Engineering School and Columbia University Medical Center to develop brain-machine interfaces to restore brain functions, using brain stimulation to see if he can come up with a device that could, for instance, help people with epilepsy: “like a pacemaker that could intervene when something is wrong,” he explains.

Wang’s research spans a broad spectrum of exciting implications, from computational neuroscience to actual, practical devices. One instrument now in clinical trials is what Wang calls a “tissue interrogation device,” essentially a set of computer-controlled hand-held mechanical tweezers that open to gently stretch skin to see how stiff it is. The tool can be used to predict imminent bedsores in bedridden patients: if the skin stiffness has been consistent, then it is safe to keep the patient flat. The portable low-cost device has a lot of potential applications beyond predicting bedsores. Says Wang, “We are hoping, for instance, that it could also be used by diabetic patients at home to check their feet for common diabetic foot ulcer problems.”

Wang has always been interested in human health. “As the population ages, the challenge of brain disorders will continue to increase,” he adds. “We are probably dealing with the most complex machine in the universe. My goal remains to bridge engineering and neuroscience together to revolutionize medicine and deepen our understanding of the vast mysteries of the brain.”