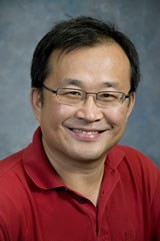 Newswise — Little Rock, Ark. (Aug. 21, 2014)--A UALR Department of Information Science professor has received a prestigious “Test of Time Award” in recognition of the groundbreaking research he conducted nearly 20 years ago.

The KDD community recently formed a committee to consider nominees for the first “Test of Time Award” in recognition of research with lasting impact. The committee reviewed all KDD conference papers published between 1995 and 2004.

Xu will be honored at the 2014 KDD Conference in New York City Aug. 24-27 where he will be joined by only two other recipients of the award. The conference has sold out, and 2,200 attendees are expected.

It was first published in 1996, but the theories contained within it still have practical applications today.

The paper introduced density-based clustering to the data mining community using the now well-known algorithm, DBSCAN. In the years since it was first brought to public attention, the algorithm has been featured in numerous textbooks and cited by thousands of researchers.

“This award speaks to Dr. Xu’s incredible analytic talent,” said Liz Pierce, UALR information science chairperson. “It adds to the prestige of our program, and it is an inspiration for our students to have someone of his caliber as a research mentor.”

Xu received his Ph.D. in Computer Science from the University of Munich in Germany, and his master’s degree from the Shenyang Institute of Computing Technology of the Chinese Academy of Sciences in Shenyang, China. He received a Bachelor of Science in mathematics from Nankai University in Tianjin, China.

Visit the UALR Department of Information Science for more information.