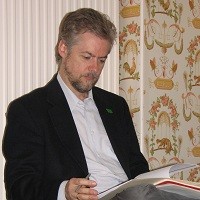 Newswise — Over the past 16 centuries, it’s been buried, soaked, lost, looted, sold across international borders, feared, destroyed by war, painted with shellac and set between sheets of glass.

Its writers, followers of a visionary named Mani, wrote their religion’s oral traditions on papyrus. Damaged by moisture and blackened by age, this precious manuscript—known as the “Dublin Kephalaia”—was almost unreadable in 2007 when Northern Arizona University professor Jason BeDuhn, an expert in comparative religions in the Department of Comparative Cultural Studies, began a translation.

An NAU seed grant gave BeDuhn and two colleagues their start; larger grants from the Australian Research Council and the National Endowment for the Humanities totaling $500,000 followed. This month, after 10 years of analysis, the manuscript’s ancient stories will be heard again.

Filling a gap in history

Found in Egypt, the Kephalaia manuscript describes a diverse, vibrant society at the crossroads of East and West.

“It’s the first Western manuscript that tells us about Iranian culture at that time,” BeDuhn said of the tales of court life and folklore. “It represents a very cosmopolitan society. At the same time, it tells how one philosopher figure founded a religious tradition.”

Mani was raised in a Jewish-Christian community and considered himself an apostle of Jesus, but his movement incorporated many different traditions.

“He said Jesus, Zoroaster and the Buddha were sent by God, but they did one thing wrong: they didn’t write down their own teachings,” BeDuhn said. “Time had distorted their messages. So, Mani said, God had sent another messenger to sort it out: him.”

Mani organized a church whose missionaries spread his ideas from Spain to China in the next 1,000 years. Then, Manicheism died out.

“Its original texts and manuscripts were lost, but in the last hundred years, some texts have been found,” DeBuhn said. “Our text is one of the largest manuscripts surviving from antiquity. It contains stories created within a century of Mani’s death.”

Now stored in the Chester Beatty Library in Dublin, Ireland, the manuscript was written in Coptic, the last form of ancient Egyptian, which BeDuhn reads. But translating the manuscript was not a simple matter of reading the text. In the 1950s, a conservator used chemicals that preserved the fragile papyrus but obscured the ink, making it difficult to tell what was papyrus and what was lettering. BeDuhn and his colleagues applied multispectral and computer-enhanced photographic techniques and viewed the pages in ultraviolet light.

“But a lot of our analysis involved sitting in the library looking at each papyrus leaf from different angles under magnification,” he said. “It was painstaking work.”

“The book tells dramatic stories, and there’s debate as Mani tries to win over other philosophers.” Some of the debates were esoteric. “For example: If a chick inside an egg dies, how does its soul get out of the egg? That was a difficult translation; we weren’t sure what they were talking about.”

On the other hand, the manuscript asks fundamental questions, such as whether the world is eternal or had a beginning.

“It’s an essential question in Buddhist thought, and Mani debates it with a person from the East named, essentially, Bodhisattva—a name for an aspiring Buddha.” BeDuhn and his colleagues found such connections throughout the text. “Iran had close contact with the Greco-Roman West as well as with India. It was a rich cultural crossroads—one we now see in much greater detail, thanks to this manuscript.”

BeDuhn is excited to see the first volume of the translation reach publication. The next three volumes will be published at the rate of one per year, concluding in 2021.

“The ‘Dublin Kephalaia Codex’ makes it clear that ancient cultures we think of as separate and distinct knew exactly what was going on with each other and were part of a larger conversation,” he said.

BeDuhn is a Guggenheim and National Humanities Center Fellow and past chair of NAU’s Department of Humanities, Arts and Religion. He is writing one book about Augustine of Hippo and another on how Manicheans viewed the soul.