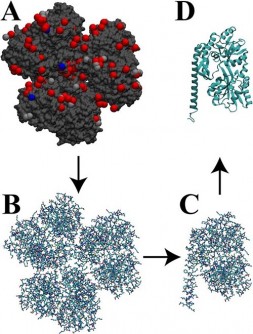 Newswise — A research collaboration between the University of Arkansas and Fayetteville High School suggests that students benefited more when using the same type of modeling software used by scientists than through other instructional techniques.

Stephen Burgin, an assistant professor of science education in the College of Education and Health Professions, worked with Mahmoud Moradi, an assistant professor in chemistry in the J. William Fulbright College of Arts and Sciences, to take free molecular visualization software, the same kind that Moradi uses to model large macromolecules, into two high school classrooms. The Next Generation Science Standards currently guiding K-12 science instruction in much of the United States list engaging students in the actual methods used by professional scientists as one of the curriculum's goals, Burgin said.

Burgin described the research in a paper published by the journal Biochemistry and Molecular Biology Education. Co-authors of the paper, along with Moradi, are Michael Kaminski and Linda Stocker, biology teachers at Fayetteville High, and Jennifer Oramous, a doctoral student in science education.

The five aspects are:

Understanding of models as exact replicas decreased over the study period but not significantly.

The team also interviewed students and teachers. They found an appreciation for the authentic nature of the program, although the teachers reported some frustration because they didn't have enough experience with it to use all of its features in the classroom.

"We believe that the evidence at hand indicates that the value of introducing students to authentic molecular modeling tools in high school classrooms outweighs the potential limitations," researchers said in the article. "The potential for using this program in other high school science classrooms and investigating its impact is substantial especially given the general level of interest in technology that diverse groups of high school students share."

The researchers encouraged high school biology teachers to work with professional scientists to come up with creative ways to engage students with practices similar to those the scientists regularly use.