1-May-2014 9:00 AM EDT, by Focused Ultrasound Foundation
favorite_border 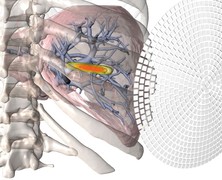 Newswise — A European collaborative group has begun a translational research project to develop a clinical system that would enable the treatment of a moving internal organ, such as the liver, using focused beams of ultrasound. The TRANS-FUSIMO (Clinical Translation of the Focused Ultrasound in Moving Objects) project builds on an earlier collaboration (FUSIMO) between 11 European countries that created simulation software.

The system will use an MRI-ultrasound combination device to monitor liver movement during respiration, in real time. Data collection will allow the software to calculate the path that the focused ultrasound should take to stay focused on the tumor despite respiratory movement.

Multiple intersecting beams of ultrasound are then directed and concentrated on the target, creating localized tissue ablation. The MRI will measure temperature distribution in the abdominal region to allow precise control.

Last year, the Focused Ultrasound Foundation reported on the Focused Ultrasound In Moving Objects (FUSIMO) project. This project involved collaboration between 11 European countries to create software that could allow focused ultrasound to treat a moving internal organ, such as the liver. At that time, the simulation process had been completed, and they had moved on to testing the software with real patients.

The TRANS-FUSIMO phase of the project was launched in January 2014 with approximately 5.6 mil Euros in funding and will run for five years. The Institute’s press release contains more details.

ABOUT FOCUSED ULTRASOUNDFocused ultrasound is a revolutionary, early-stage therapeutic technology with the potential to transform the treatment of many serious medical disorders. This breakthrough technology uses ultrasonic energy guided by magnetic resonance or ultrasound imaging to treat tissue deep in the body without incisions or radiation. Multiple intersecting beams of ultrasound are directed and concentrated on a target as small as a grain of rice, much like a magnifying glass can focus multiple beams of light on a single point.

Focused ultrasound is currently approved in the U.S. to treat uterine fibroids and painful bone metastases, and there are a growing number of clinical applications in various stages of research and development around the world, including Parkinson’s disease, essential tremor, neuropathic pain, breast and prostate cancer, and brain tumors.

ABOUT THE FOCUSED ULTRASOUND FOUNDATIONThe Focused Ultrasound Foundation was created to improve the lives of millions of people worldwide by accelerating the development and adoption of focused ultrasound therapies. The Foundation works to clear the path to global adoption by coordinating and funding research, fostering collaboration among stakeholders, and building awareness of the technology among patients and professionals. The Foundation is dedicated to ensuring that focused ultrasound finds its place as a mainstream therapy for a range of conditions within years, not decades. Since its establishment in 2006, the Foundation has become the largest non-governmental source of funding for focused ultrasound research. More information about the Charlottesville, Virginia-based Foundation can be found at www.fusfoundation.org.