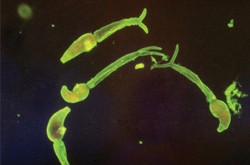 Schistosoma in its larval stage of life.

Newswise — BOSTON (April 16, 2014)—Researchers at the Sackler School of Graduate Biomedical Sciences at Tufts and Tufts University School of Medicine (TUSM) have uncovered a mechanism that may help explain the severe forms of schistosomiasis, or snail fever, which is caused by schistosome worms and is one of the most prevalent parasitic diseases in the world. The study in mice, published online in The Journal of Immunology, may also offer targets for intervention and amelioration of the disease.

Schistosomiasis makes some people very sick whereas others tolerate it relatively well, and no one knows precisely why. To answer this question, Miguel Stadecker, M.D., Ph.D., professor in the Department of Integrative Physiology & Pathobiology at Tufts University School of Medicine, uses mouse strains that similarly develop severe or mild disease. He and Holly E. Ponichtera, graduate student in immunology at the Sackler School, discovered that an innate cell receptor called CD209a is linked to the development of T helper (Th) 17 cells, which can cause marked inflammation.

Th17 cells are part of the adaptive immune response, fighting certain disease-causing bacteria and fungi, but they are also implicated in the pathogenesis of autoimmune diseases. The Stadecker lab had previously reported that blocking Th17 cell function limits severe schistosomiasis.

“This is important,” says Ponichtera, “because CD209a is a mouse equivalent of a molecule that in humans is called DC-SIGN, a lectin receptor on dendritic cells that senses a variety of pathogens, including the virus that causes AIDS. Regulating this molecule may prevent excessive unwanted inflammation, such as that seen in severe schistosomiasis.”

Stadecker has been studying this disease since the 1980s, analyzing the host’s immune response to the parasite eggs. His earlier work showed the importance of Th17 cells in understanding schistosomiasis. This type of T cell was present in larger quantities in mice with severe disease. He surmised that the Th17 cells also caused the severe inflammatory response seen in some patients.

In 2013, the laboratory’s discovery of the role of Th17 cells was confirmed in the field when an international team of researchers tested blood samples from children in Senegal who were infected with schistosomiasis. The samples confirmed that Th17 cells were increased in patients with measurable pathology whereas, in infected individuals with no overt symptoms, the Th17 cells were offset by T regulatory cells that inhibit inflammation.

“We don’t yet understand why mice that develop severe inflammation express about 20 times higher levels of CD209a than mice that do not develop severe disease, and we don’t yet know about the role of DC-SIGN in human schistosomiasis. However, these cumulative results move us a bit closer to understanding why the disease manifestations can range from very few symptoms to death. Our studies might also have implications for diseases caused by other pathogenic helminths,” said Stadecker, also a member of the also a member of the immunology program faculty at the Sackler School.

For more than 249 million people in the world, water is both a precious resource and a vehicle of disease. Fresh-water snails living in certain tropical regions of the world release the larval forms of the schistosome parasite, which penetrate the skin, migrate through the body, and develop into adults that lay eggs that cause the disease. While some people experience chronic infection with mild symptoms, about 10%, will develop severe inflammatory disease that can affect the gastrointestinal, urinary, and nervous systems, in some cases causing cancer or leading to death.

Although schistosomiasis is not contracted in the United States or Europe, the World Health Organization reports that this neglected tropical disease is endemic primarily in Africa, but is also found in South America, the Middle East, and Asia. Population migration has introduced schistosomiasis to new areas. Although effective drug treatment is available, re-infection is pervasive, and a vaccine is not available.

If you are a member of the media interested in learning more about this topic, or speaking with a faculty member at the Tufts University School of Medicine or another Tufts health sciences researcher, please contact Siobhan Gallagher at 617-636-6586.