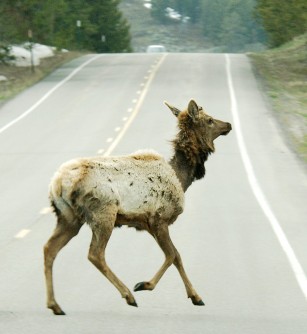 Newswise — The Idaho Transportation Department (ITD), Idaho Department of Fish and Game (IDFG) and Wildlife Conservation Society (WCS) today announced the completion of a four-year collaborative study in Idaho’s Island Park area that will better inform decision-making with regard to wildlife-related hazards and improved safety on U.S. Highway 20 and Idaho Highway 87.

The study focused primarily on moose and elk behavior and their movements across U.S. Highway 20—a busy north-south thoroughfare in the town of Island Park often referred to as “the longest main street in America.” Between the cities of Ashton and Island Park, U.S. Highway 20 was the site of 169 recorded collisions resulting in the fatalities of moose, elk, white-tailed deer, and mule deer, and millions of dollars in collision damage to vehicles between 2005 and 2009.

“Wildlife-vehicular collisions are a threat to both people and wildlife populations,” said WCS Conservation Scientist Jon Beckmann, a principal investigator on the study. “Thankfully, through collaborations among partners like those involved here, and the emerging science of road ecology, we are mitigating that threat where possible.”

As part of the study, 37 adult female migratory elk and 42 female adult migratory and non-migratory moose were captured and fitted with collars that carry a global positioning device. The device recorded animal locations via satellites and allowed scientists to track migration routes from their winter range in the St. Anthony Sand Dunes and Sand Creek Wildlife Management Area of Idaho to their summer feeding grounds in the Island Park Caldera of the Greater Yellowstone Ecosystem.

In addition to data on the number of crossings, the scientists used novel modeling techniques to identify preferred crossing points, migration corridors, and wildlife movement patterns. The data indicated multiple specific locations along U.S. Highway 20 and State Highway 87, where the highest probability of road crossings were similar between elk and moose.

The scientists recommended six of these areas for initial targeting of mitigation measures to achieve the greatest impacts for both species. Such mitigation measures may consist of crossing structures--such as overpass and underpass structures--which allow wildlife to cross road barriers without accessing the road surface itself. In addition, associated fencing and warning systems to alert motorists of wildlife approaching the roadway are being considered.

“Animals migrating between Yellowstone National Park and the Sand Creek desert of eastern Idaho must cross U.S. Highway 20,” said Idaho Department of Fish and Game biologist Shane Roberts. “Therefore to effectively manage these wildlife populations and maintain migration paths between Yellowstone National Park and eastern Idaho, we must understand how animals successfully navigate highways and work to maintain that capability.”

WCS scientists suggested to ITD officials that they consider addressing two additional locations of mitigation approaches for non-migratory moose as this group was responsible for the largest number of crossings of U.S. Highway 20 in the study and are therefore more susceptible to wildlife collisions with drivers.

Wildlife-vehicle collisions are not the only significant threat that roads pose to wildlife. Roads can also impede migrations, subdivide animal populations and habitats, and cause animals to alter foraging and mating behavior.

Tim Cramer, ITD Senior Environmental Planner and a principal investigator on the study said, “This cooperative research will assist ITD in moving forward from research-based recommendations to management actions that will help keep this area safe for the traveling public and for the important wildlife resources we all treasure in the Island Park Area.”

To augment telemetry data obtained from the radio collars, a more low-tech approach was used to identify where non-collared animals cross the road. As part of the ongoing research, WCS and IDFG recruited the help of the Idaho Master Naturalists (IMN). The IMN are volunteer “citizen scientists” who were trained to conduct surveys for animal tracks alongside U.S. Highway 20 and to report wildlife observations.

Next steps of the project include using the crossing location data to determine how best to mitigate the impacts of U.S. Highway 20 on ungulate (hoofed mammal) migrations. In so doing, safety for the traveling public on this key access road into the region near Yellowstone National Park will be improved, and an imperiled ecological phenomenon can be protected.