Project to Save Endangered Tasmanian Devil 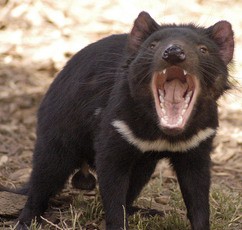 Newswise — University of Adelaide zoologist Dr Jeremy Austin will lead a national project to help save the endangered Tasmanian devil from extinction.

Dr Austin and colleagues from SA Zoos and the Tasmanian Government will spend the next three years establishing a conservation program and working to suppress the infectious cancer, devil facial tumour disease, which is ravaging Australia's largest living marsupial carnivore.

The Tasmanian devil is not only a key tourism icon for Australia's most southern State, but also ecologically critical to Tasmania's native ecosystem.

"Extinction of the species is a possibility within the next two decades unless disease spread can be stopped," says Dr Austin.

Because Tasmanian devils have extremely low levels of genetic diversity and a chromosomal mutation unique among carnivorous mammals, they are more prone to the infectious cancer. Dr Austin's team will analyse genetic material from devil populations to understand the origin, spread and impact of the disease and try to find a vaccine.

"We need to establish whether the low levels of genetic diversity are due to recent human impacts or a long-term historical pattern. We also need to look at how the cancer is affecting surviving populations and identify individuals that may be resistant to the disease."

Tasmanian devils became extinct on the Australian mainland at least 400 years ago and are now found only in Tasmania. Unlike Tasmanian tigers, devils survived initial human impacts following European colonisation but in the past decade their numbers have fallen drastically.

"We have lost over half our devils in the past 10 years, with an estimated population of 20,000 to 50,000 mature devils left. Extinction within the next 20 years is a real possibility unless we find a vaccine, eradicate the disease and establish captive colonies," Dr Austin says.

Devil facial tumour disease is one of only two known clonally transmissible cancers and appears to have originated from a genetic change of mutation in a single individual. It is spread through biting, without any evidence of recovery or resistance to the disease.

The project, which has received $168,000 from the Federal Government, combines ancient DNA methods and modern genetic procedures to examine the impact of the disease on Tasmanian devils.