ProMedica Focuses on Food as Preventive Medicine with Food Pharmacy 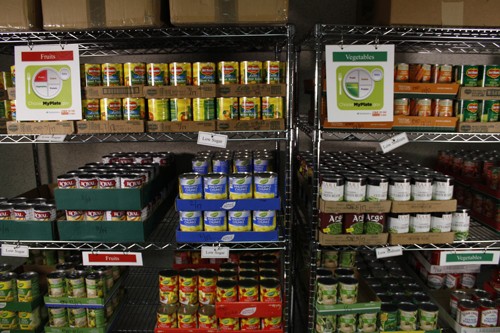 Newswise — TOLEDO, Ohio, December 17, 2015 – As part of its mission to improve health and well-being, ProMedica has opened its first food pharmacy and is preparing to open additional locations in northwest Ohio.

In April, ProMedica providers began screening adult and pediatric patients for food insecurity. More than 1,200 of those patients have been referred to its food pharmacy with prescriptions for food to supplement their overall treatment plan. A second food pharmacy will open this month inside the new ProMedica Health and Wellness Center that is expected to treat approximately 1,500 patients a day.

The food pharmacy offers a variety of fresh, frozen and canned food products. It is staffed with clinical dietitians who recommend foods that are ideal for certain health conditions. Patients also receive nutrition education information, healthy recipes and referrals to community programs that help individuals in need of food and other basic resources.

"Food insecurity is often associated with chronic health conditions, such as hypertension and diabetes," said Chloe Plummer, ProMedica clinical dietitian. “Many researchers are taking a closer look at the link between malnutrition and mental illness.”

The U.S. Department of Agriculture estimates that roughly 14 percent of American households were food insecure at some time during the year in 2014, meaning they lacked access to enough food for an active, healthy life for all household members. Approximately 7.9 million children lived in food-insecure households in 2014.

The American Academy of Pediatrics is now recommending that pediatricians screen all children for food insecurity by asking basic questions about the availability of food in their household and the ability of the family to afford food. Research has found that children who are food insecure are at a higher risk of adverse health, recover more slowly from illness and have difficulty concentrating and performing well in school.

Since 2013, ProMedica has been working on a national level to raise awareness about hunger as a health issue, address food insecurity and increase access to healthy and affordable food in underserved communities. By early 2016, ProMedica will be screening patients for food insecurity in all of its acute care hospitals.

For more information about how ProMedica is addressing hunger as a health issue, visit www.promedica.org.

ProMedica is a mission-based, not-for-profit healthcare organization serving northwest Ohio and southeast Michigan. The 13-hospital system has more than 17,000 employees, 2,300 physicians with privileges, and more than 800 healthcare providers employed by ProMedica Physicians. Additionally it offers a health plan, Paramount, which serves 320,000 members including more than 225,000 members in the statewide Medicaid plan. Driven by its Mission to improve your health and well-being, ProMedica offers a full range of diagnostic, medical and surgical specialties in areas such as emergency medicine and trauma, behavioral health, heart and vascular, oncology, orthopaedics, neurology, and women’s and children’s services. The health system has been nationally recognized for its advocacy programs and efforts to raise awareness about hunger as a health issue. For more information about ProMedica, please visit www.promedica.org/aboutus. ###