Promising Class of Antibiotics Discovered for Treatment of Drug-Resistant Tuberculosis 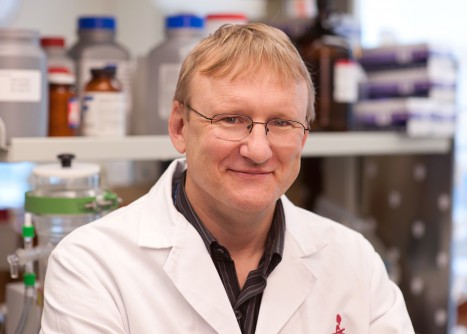 Newswise — (MEMPHIS, Tenn. – January 27, 2014) St. Jude Children’s Research Hospital scientists have discovered a promising new class of antibiotics that could aid efforts to overcome drug-resistance in tuberculosis (TB), a global killer. The drugs increased survival of mice infected with TB and were effective against drug-resistant strains of TB. St. Jude led the international research effort, results of which appear in the current issue of the journal Nature Medicine.

The antibiotics, called spectinamides, were created by changing the chemical structure of an existing antibiotic, spectinomycin, which does not work against TB.

In multiple trials of mice with both active and chronic TB infections, researchers report that one version of the new drug—an analog known as 1599—was as good as or better than current TB drugs at reducing levels of the bacteria in the lungs of mice. In addition, 1599 caused no serious side effects.

“This study demonstrates how classic antibiotics derived from natural products can be redesigned to create semi-synthetic compounds to overcome drug resistance,” said corresponding author Richard Lee, Ph.D., a member of the St. Jude Department of Chemical Biology and Therapeutics. “I hope the result will be drugs that are more effective against tuberculosis and offer a faster route to a cure with fewer side effects.”

TB remains a leading cause of global illness and death. The latest data from the World Health Organization estimates that TB kills 1.3 million persons annually and sickens 8.6 million worldwide. Current treatment requires months of multi-drug therapy to eradicate the slow-growing bacterium, which can lie dormant for years without causing symptoms and results in hard to treat chronic or latent infections. The rise of multi-drug resistant TB, including strains reportedly resistant to all available medications, has further complicated treatment.

This new class of antibiotics works against TB by disrupting the function of a part of the cell known as the ribosome, which is responsible for protein synthesis. To do that, the spectinamides bind to a particular site on ribosomes that is not shared by other TB drugs. That allows the drug to be used in combination with other medications.

For this study, researchers used an approach called structure-based design to re-engineer how spectinomycin binds to the ribosome. To guide their design efforts, scientists used a 3-D model that provided an atomic-level view of spectinomycin bound to the tuberculosis ribosome. The study reinforces the potential of structure-based design as a tool for designing other new agents to block mechanisms TB and other bacteria use to resist current antibiotics, Lee said.

The research reports on the first 20 of the more than 120 spectinomycin derivatives that have resulted from the effort. The list includes 1599 and two other analogs tested against TB in mice.

The three analogs not only bound the ribosome tightly, but they were more successful at avoiding a TB resistance mechanism called efflux. The TB bacteria use efflux pumps as a strategy to remove drugs and other threats from the cell before they can work against the bacteria. Efflux pumps, however, did not protect TB against spectinamides.

The drugs were also effective against multi-drug-resistant strains of TB growing in the laboratory. The strains had been isolated from patients with the disease.

Researchers also found no evidence that 1599 or the two other analogs tested interfered with normal functioning of human cells. Preliminary safety testing on cells grown in the laboratory showed the drugs were not toxic to mammalian cells because they only inhibit the bacterial ribosomes and not mammalian ribosomes.

Work is underway now in mice combining 1599 with new or existing TB drugs. The goal is to identify multi-drug therapy to try in a clinical trial of patients with drug-resistant TB.