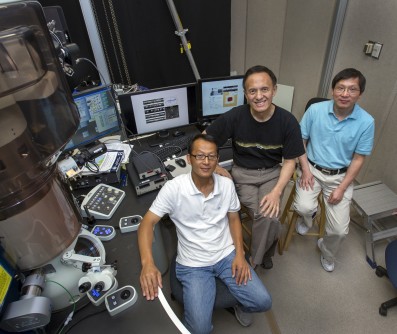 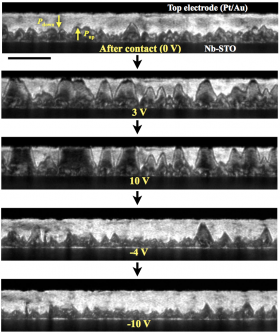 These dark-field transmission electron microscopy (TEM) images show ferroelectric domain switching under various external biases. Without external current, the PZT film is split—the two opposing polarization are arranged in a head-to-head configuration. Crucially, with –10 V applied in the bottom image, the domains near the PZT/Nb-STO interface fail to switch. 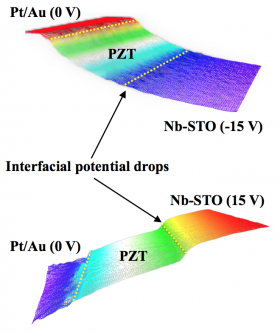 Electrostatic potential landscapes reconstructed from electron holography data with 15 volts of positive or negative current applied to the substrate (Nb-STO). The much steeper potential drop from the +15 V signifies a higher electric field, whereas the -15 V yielded a much flatter curve—indicating the charge asymmetry within the material.

Newswise — UPTON, NY—Electronic devices with unprecedented efficiency and data storage may someday run on ferroelectrics—remarkable materials that use built-in electric polarizations to read and write digital information, outperforming the magnets inside most popular data-driven technology. But ferroelectrics must first overcome a few key stumbling blocks, including a curious habit of "forgetting" stored data.

Now, scientists at the U.S. Department of Energy's Brookhaven National Laboratory have discovered nanoscale asymmetries and charge preferences hidden within ferroelectrics that may explain their operational limits.

"The positive or negative polarizations in these ferroelectric materials should be incredibly easy to switch, but the reality is much stranger," said Brookhaven Lab physicist Myung-Geun Han, lead author on the new study. "To our surprise, opposing electronic configurations only allowed for polarization in one direction—a non-starter for reading and writing data."

Most electronic devices rely on ferromagnetism to read and write data. Each so-called ferromagnetic domain contains a north or south magnetic polarity, which translates into the flipping 1 or 0 of the binary code underlying all digital information. But ferromagnetic operations not only require large electric current, but the magnets can flip each other like dominoes when packed together too tightly—effectively erasing any data.

Ferroelectrics, however, use positive or negative electric charge to render digital code. Crucially, they can be packed together with domains spanning just a few atoms and require only a tiny voltage kick to flip the charge, storing much more information with much greater efficiency.

"But ferroelectric commercialization is held up by material fatigue, sudden polarization reversal, and intrinsic charge preferences," said Brookhaven Lab physicist and study coauthor Yimei Zhu. "We suspected that the origin of these issues was in the atomic interactions along the material's interface—where the ferroelectric thin film sits on a substrate."

The scientists examined ferroelectric films of lead, zirconium, and titanium oxide grown on conductive substrates of strontium, and titanium oxide with a small amount of niobium—chosen because it exhibits large polarization values with well-defined directions, either up or down. The challenge was mapping the internal electric fields in materials thousands of times thinner than a human hair under actual operating conditions.

Brookhaven scientists hunted down the suspected interface quirks using electron holography. In this technique, a transmission electron microscope (TEM) fired 200,000-volt electron wave packets through the sample with billionth-of-a-meter precision. Negative and positive electric fields inside the ferroelectric film then attracted or repelled the electron wave and slightly changed its direction. Tracking the way the beam bent throughout the ferroelectric film revealed its hidden charges.

"Rather than an evenly distributed electric field, the bending electron waves revealed non-uniform and unidirectional electric fields that induced unstable, head-to-head domain configurations," Han said. "For the first time, we could see these unusual and jagged polarizations mapped out in real space and real time."

These opposing polarizations—like rival football teams squaring off aggressively at the line of scrimmage—surprised scientists and challenged assumptions about the ferroelectric phenomenon.

"These results were totally unexpected based on the present understanding of ferroelectrics," Han said.

The asymmetries were further confirmed by measurements of electron-beam-induced current. When a focused electron beam struck the ferroelectric sample, electric fields within the film-substrate interface revealed themselves by generating additional current. Other techniques, including piezoresponse force microscopy—in which a sub-nanometer tip induces a reaction by pressing against the ferroelectric—also confirmed the strange domains.

"Each technique demonstrated this intrinsic polarization preference, likely the origin of the back-switching and poor coding performance in these ferroelectrics," Han said. "But these domain structures should require a lot of energy and thus be very unstable. The interface effect alone cannot explain their existence."

"We suspect that more oxygen could be missing near the surface of the thin films, creating electron pockets that may neutralize positive charges at the domain walls," Han said. "This oxygen deficiency naturally forms in the material, and it could explain the stabilization of head-to-head domains."

This electron-swapping oxygen deficiency—and its negative effects on reliably storing data—might be corrected by additional engineering, Han said. For example, incorporating a "sacrificial layer" between the ferroelectric and the substrate could help block the interface interactions. In fact, the study may inspire new ferroelectrics that either exploit or overcome this unexpected charge phenomenon.

The research was supported by the U.S. Department of Energy's Office of Science. 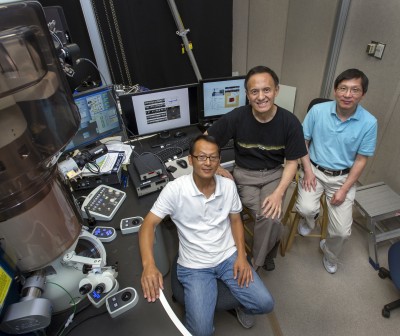 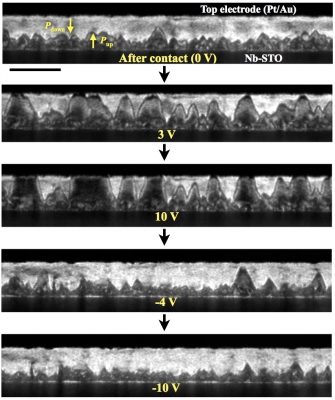 Caption: These dark-field transmission electron microscopy (TEM) images show ferroelectric domain switching under various external biases. Without external current, the PZT film is split—the two opposing polarization are arranged in a head-to-head configuration. Crucially, with –10 V applied in the bottom image, the domains near the PZT/Nb-STO interface fail to switch. 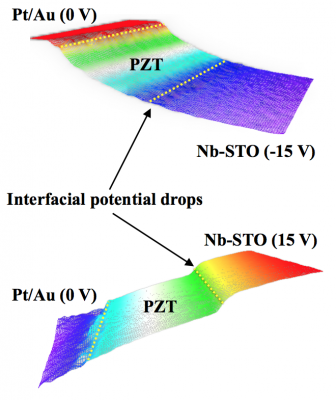 Caption: Electrostatic potential landscapes reconstructed from electron holography data with 15 volts of positive or negative current applied to the substrate (Nb-STO). The much steeper potential drop from the +15 V signifies a higher electric field, whereas the -15 V yielded a much flatter curve—indicating the charge asymmetry within the material.