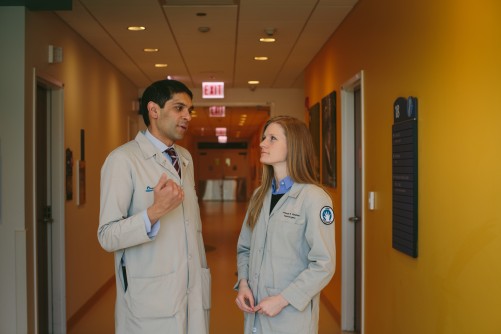 Newswise — Researchers from Northwestern Medicine and Ann & Robert H. Lurie Children’s Hospital of Chicago have revealed new insight into how the most deadly pediatric brain tumor, diffuse intrinsic pontine glioma (DIPG), may develop. They also have identified a compound that targets the “on” switch for cancer-promoting genes, which resulted in shrinking tumor size and increased survival in an animal model of DIPG. Preparations for a clinical trial at Lurie Children’s are now under way.

Their findings, published in Nature Medicine, bring new hope to children with this devastating brain tumor. Unlike some other brain tumors, only 5 percent of children with DIPG are surviving two years after diagnosis. Currently the standard treatment is radiation therapy, which temporarily decreases symptoms but does not cure the disease.To investigate the earliest signals within a cell nucleus that lead to DIPG, researchers focused on the effects of a mutation in histone H3, a protein that acts like a spool on which the thread of DNA is wrapped, regulating gene expression. This mutation (called H3K27M) is unique to malignant tumors like DIPG, occurring in over 80 percent of tumors. The team was the first to show that the H3K27M mutation triggers histone acetylation, a biochemical mark that controls gene expression, to turn on cancer promoting genes. In DIPG, this “on” switch for gene expression replaces methylation, or a protective “off” switch for cancer-causing genes. The net result is increased expression of the wrong genes, leading to the development of DIPG. This discovery presented an ideal target for an investigational drug known to stop acetylation.

“In this study we successfully targeted histone acetylation with a bromodomain inhibitor, a compound that is currently in studies for different types of advanced cancers in adults, but has never been studied in DIPG,” said senior author Ali Shilatifard, PhD, Chair of Department of Biochemistry and Molecular Genetics and Robert Francis Furchgott Professor at Northwestern University Feinberg School of Medicine. “We were able to show that it kills tumor cells in culture and shrinks the tumor in a mouse model of DIPG. These are very exciting results that we hope will be valuable for children with DIPG. A clinical trial is our next step.”

The team hopes to open a Phase I clinical trial at Lurie Children’s by the end of 2017. “Our research moved from the bedside to the lab and back to the bedside,” said co-author Amanda Saratsis, MD, pediatric neurosurgeon at Lurie Children’s and Assistant Professor at Northwestern University Feinberg School of Medicine. “We used biopsied tumor samples from DIPG patients to create models in the lab, which we studied and then used to test a novel, targeted approach to treating the tumor. Because of the unique multidisciplinary expertise of our team, in less than two years we were able to make an incredible basic science discovery that can be directly translated back to the clinic through an upcoming clinical trial of this new treatment approach for children with DIPG.”

“At Lurie Children’s we see many children with DIPG and they are a powerful inspiration to develop an effective treatment as quickly as possible,” said co-author Rishi R. Lulla, MD, pediatric neuro-oncologist at Lurie Children’s and Assistant Professor at Northwestern University Feinberg School of Medicine. “We are thrilled that we can offer our patients a novel clinical trial in the near future.”

This research was made possible through generous philanthropic support from the John McNicholas Pediatric Brain Tumor Foundation, among others.