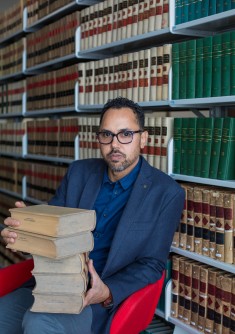 Artist Edgar Arceneaux poses with law books that will be incorporated into a new sculpture at the University of Utah S.J. Quinney College of Law.

Newswise — The University of Utah S.J. Quinney College of Law will officially unveil a new sculpture by Los Angeles-based Edgar Arceneaux, a rising star in the art world who has created an original work for the law school to represent Martin Luther King Jr.’s iconic quote, “The arc of the moral universe is long, but it bends towards justice.”

Arceneaux will introduce the sculpture in a ceremony on the first floor of the law school, 383 S. University Street, from 5-6 p.m. on Sept. 28.

The project is part of the S.J. Quinney College of Law’s mission to promote justice and access to justice in society. The sculpture was funded through the generosity of donors —Zions Bank and I.J. and Jeanne Wagner Foundation—who approached the law school with a desire to contribute funds for a commissioned sculpture to celebrate diversity and build on the theme of justice expressed by King Jr.’s quote, which is displayed in the school’s sixth floor moot courtroom. Arceneaux’s concept, “The Crystal Paradox,” is composed of metal and glass vitrine light boxes. The artwork contains crystallize deaccessioned law books and redacted letters from the FBI. The letters are rendered in glass and mirror, and tell the story of the U.S. government’s covert operations against the civil rights movement in 1950-1970s America. The sculputre — which spans two stories in height — is designed to explore the story of the law as tool for the people as well as weapon for people and institutions that want to maintain the status quo. The art will be displayed in the law school’s lobby and stand as a tribute to the history of a beautiful struggle, while challenging students to imagine how they want to participate in the arc of history.

Arceneaux’s proposal was selected from a pool of artists from around the world who offered submissions and ideas for the sculpture.

“We embrace free speech but we shun hate speech, and we help society establish the appropriate line between the two. We support the right to assemble and to protest, but lawfully and in ways that do not intimidate others or incite violence. We also teach equal protection and the right of all people to dignity, fairness and respect. We do not tolerate discrimination against any person or group based on race, religion, ethnicity or sexual orientation. Finally, we teach and model ways to express disagreement respectfully in all venues,” Adler said.

In addition to the new sculpture, thanks to the generosity of Zions Bank the law school this month will kick off a new lecture series entitled, “Diverse Ideas in Law and Culture,” designed to bring a wider range of speakers and perspectives to the College of Law. The dean’s Diversity Council will choose the speakers with the help of an advisory committee.

ABOUT THE ARTIST
Edgar Arceneaux was born in Los Angeles in 1972. He investigates historical patterns through drawings, installations, and multimedia events, such as the reenactment of Ben Vereen’s tragically misunderstood blackface performance at Ronald Reagan’s 1981 Inaugural Gala. In the artist’s work, linear logic is abandoned in favor of wordplay and visual associations, revealing how language, technology, and systems of ordering produce reality as much as describe them. Seemingly disparate elements — such as science fiction, civil rights era speeches, techno music, and the crumbling architecture of Detroit — find a new synchronicity in the artist’s hands, ultimately pointing to larger historical forces such as the rise of the surveillance state. Arceneaux’s installations have taken the form of labyrinths, libraries, multi-channel videos, and drawn landscapes that change over the course of an exhibition, only ever offering a partial view of the whole at any given moment. This fragmentation extends to the artist’s use of historical research in his work, such as FBI documents concerning civil rights leader Martin Luther King, Jr., where redacted passages are presented on mirrors that reflect the viewer’s curious gaze.